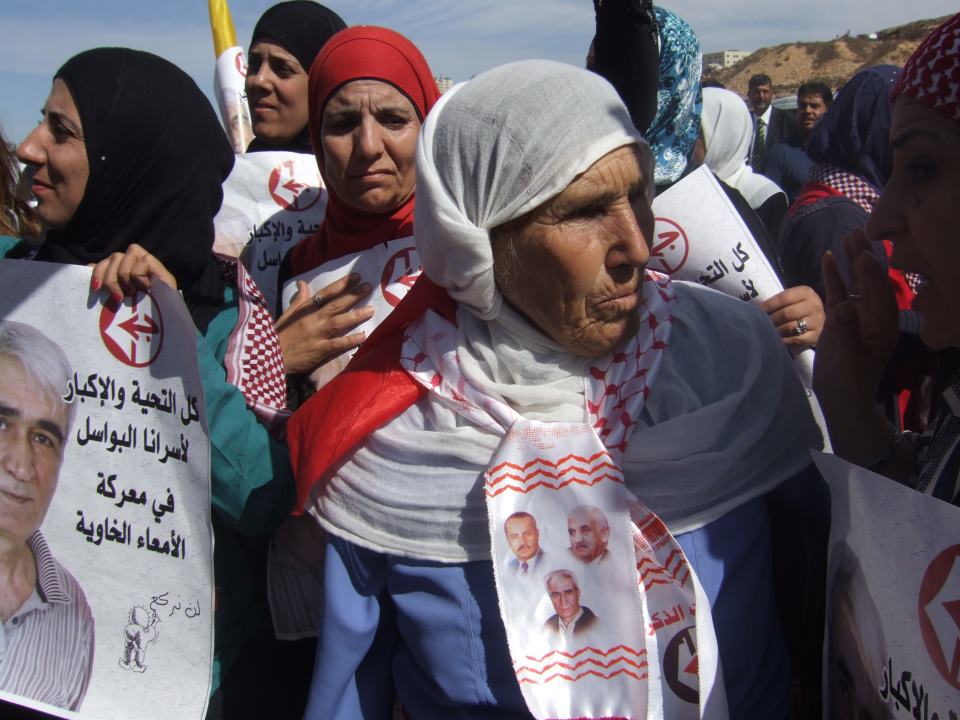 March 14, 2015 marks the ninth anniversary of the siege, assault and invasion of the Jericho prison and the kidnapping of Ahmad Sa’adat, Palestinian national leader and the General Secretary of the Popular Front for the Liberation of Palestine, his comrades Ahed Abu Ghoulmeh, Majdi Rimawi, Basel al-Asmar and Hamdi Qur’an, and longtime Palestinian official Fuad Shobaki, by Israeli occupation forces.

The attack on Jericho prison – by Israeli bulldozers and tanks – destroyed the prison structure itself, as the occupation forces killed two Palestinians, injured twenty-three more, and kidnapped political prisoners. The political prisoners in the Palestinian Authority prison had been held under U.S. and British guard since 2002, a condition of the deal between the PA leadership, the Israeli occupation, the U.S. and Britain that saw them transferred from then-PA President Yasser Arafat’s compound to Jericho prison. However, the U.S. and British guards walked away from their posts shortly before the Israeli attack, clearly indicating that they were never there to guard or ensure the security of the prisoners, but rather simply to serve the interests of the occupation, whose armed attack took place with the latest in U.S.-made and provided heavy weaponry.

The U.S. and British guards (some of whom had previously served as colonial guards imprisoning Irish prisoners of the Irish liberation movement) justified their invitation to the Zionist military assault by claiming that the newly-elected Palestinian Legislative Council majority in the 2006 elections had pledged to implement Palestinian law and free the Palestinian prisoners held by the Palestinian Authority at the behest of Israel, the U.S. and Britain. The siege and attack on Jericho came side by side with the siege on Gaza implemented in 2006, determined to suppress and wage war on Palestinian resistance in all of its political aspects, by all means.

Today, Sa’adat and his comrades are among 6,000 Palestinian political prisoners in Israeli jails, struggling for their freedom. Sa’adat – who was isolated for three years until the mass 2012 hunger strike returned him to the general prison population –  is sentenced to 30 years in prison on charges of “incitement” and holding a post in a “hostile organization” – the term used by the occupation to criminalize every Palestinian political party, resistance movement, including student, women’s and labor organizations.

It must be noted that just as Palestinian political prisoners stand on the front lines of the Palestinian liberation struggle, they confront all of the forces that suppress the Palestinian people and their cause: reactionary regimes, the Palestinian Authority (which engages in security coordination with the occupier), and at the forefront, imperialism and Zionism. The intelligence agencies and security services of imperialist powers work hand in hand with the Zionist state and its intelligence agencies to suppress organizing for Palestinian liberation. Ahmad Sa’adat has confronted exactly this convergence of forces: arrested in 2002 by the Palestinian Authority under Israeli orders; transferred to Jericho, the PA’s prison, under U.S. and British guard; then kidnapped by the Israeli occupation forces in a brutal military raid.

The PA’s security coordination with Israel – executed through political arrests and suppression of the resistance – is a particularly dangerous and damaging weapon against the Palestinian cause, as seen here in the PA’s responsibility for the imprisonment of Sa’adat and his comrades. This case also highlights the responsibility of the U.S. and Britain and their historical and present colonial and imperial involvement in Palestine and in the imprisonment and assassination of Palestinian leaders and fighters. The responsibility of Britain in supporting, enabling and arming the Zionist movement in its own colonization of Palestine – and its military orders imposing administrative detention, home demolitions and executions on Palestinian prisoners – must be made very clear.

This year, the anniversary of the Jericho assault comes in the run-up to yet another Zionist election campaign based on a competition over which party can more effectively and efficiently carry out the settler-colonial, exterminationist agenda against the Palestinian people, including threats to execute Palestinian political prisoners. In 2006, Ehud Olmert bolstered his (and Kadima’s) re-election campaign with the blood of Palestinians in Jericho and the imprisonment of Ahmad Sa’adat and his comrades. Israeli elections have always been and continue to be threats to the Palestinian people – by all Zionist parties vying for power.

Today, on the ninth anniversary of the attack on Jericho prison and the kidnapping of Sa’adat and his comrades, we reiterate our call for freedom for every prisoner of Zionism and imperialism. This includes not only Sa’adat and his comrades, and all of the Palestinian and Arab prisoners in Israeli jails, but also the valiant prisoners around the world, imprisoned and persecuted for their support of Palestine – like Georges Ibrahim Abdallah, imprisoned in French jails for over 30 years; Rasmea Odeh, a former Palestinian political prisoner and torture survivor now facing imprisonment and deportation in the United States; the Holy Land Five, imprisoned in the U.S. for decades-long sentences for financial support to Palestinian charities. It also includes all those prisoners around the world jailed for their leadership and involvement in the struggle of their own people for liberation: prisoners of the Black Liberation, Puerto Rican, Colombian and Indigenous movements; political prisoners in the Philippines imprisoned for their struggle against imperialism and exploitation; prisoners in Colombia who have resisted U.S. imperialism; political prisoners of the Basque movement; revolutionary prisoners in Greece and Turkey; and countless more.

“Our vision and strategy, as the Popular Front, to resolve the conflict in Palestine, is the dismantling of the Zionist racist colonial project and building a democratic state, one state on the entire land of Palestine, governed by a democratic system that rejects all forms of discrimination on the basis of color, race, nationality or religion and builds relationships among the inhabitants of Palestine, Arabs and Jews, on the basis of citizenship and equality in rights and responsibilities.”

3. Use the form to let the Campaign to Free Ahmad Sa’adat know about your local action or email us at campaign@freeahmadsaadat.org.