Home About the Campaign 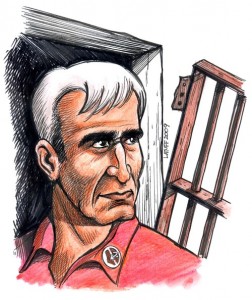 Sa’adat was sentenced to 30 years in the occupation prisons on December 25, 2008. On March 18, 2009, Sa’adat was moved into isolation at Asqelan prison, facing serious medical consequences. In June 2009, Sa’adat engaged in a nine-day hunger strike against his isolation. On August 10, 2009, Sa’adat was moved from the isolation cells at Asqelan to the isolation unit at Ramon prison in the Naqab desert.Sa’adat’s isolation has since been extended repeatedly.He was finally released from isolation following the May 14 agreement to end the mass hunger strike from April-May 2012, in which over 2,500 Palestinian prisoners participated, and transfered to Shata Prison in Gilboa.

Sa’adat, with five other Palestinian prisoners, was kidnapped by the Israeli military on March 14, 2006 after a siege upon the prison in Jericho, where he was being held under a U.S. and British guard at a Palestinian Authority prison.

This is a campaign of human rights activists and concerned people from around the world, coming together to address the travesty of justice taking place, and calling for justice and freedom for Ahmad Sa’adat and all Palestinian political prisoners. 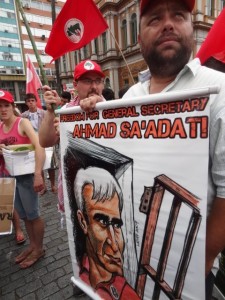 We are asking you now to join us in building international solidarity for the freedom of Ahmad Sa’adat and his fellow Palestinian prisoners. Ahmad Sa’adat is a prisoner of conscience, subject to the illegitimate military courts of an illegal military occupation. Indeed, the “security-related charges” against him, such as they are, embody political persecution and targeting for repression due to political activity, including such charges as membership in a forbidden organization (the Popular Front for the Liberation of Palestine, of which he is General Secretary), holding a post in a forbidden organization, and incitement – for a speech delivered after the murder of Abu Ali Mustafa, the previous General Secretary of the Popular Front for the Liberation of Palestine, by the Israeli military, as he worked in his office.

Ahmad Sa’adat is joined by thousands of other Palestinian prisoners, including other Palestinian political leaders, in facing imprisonment by the authorities of an illegal military occupation. These include over a dozen members of the Palestinian Legislative Council elected in 2006, including Sa’adat and Marwan Barghouti, prominent Palestinian leader. Abdelaziz Dweik, chair of the PLC, was recently released after a period of administrative detention that followed quickly on his earlier three years in prison.

Your help and support are needed to secure justice and freedom for Ahmad Sa’adat and Palestinian political prisoners. Please take action today!

Join the email list to get alerts and other news! Email us at campaign@freeahmadsaadat.org to join the list.

Press inquiries : For comment from the media or legal teams in Palestine, interviews with Ahmad Sa’adat, or other media inquiries, please contact campaign@freeahmadsaadat.org.