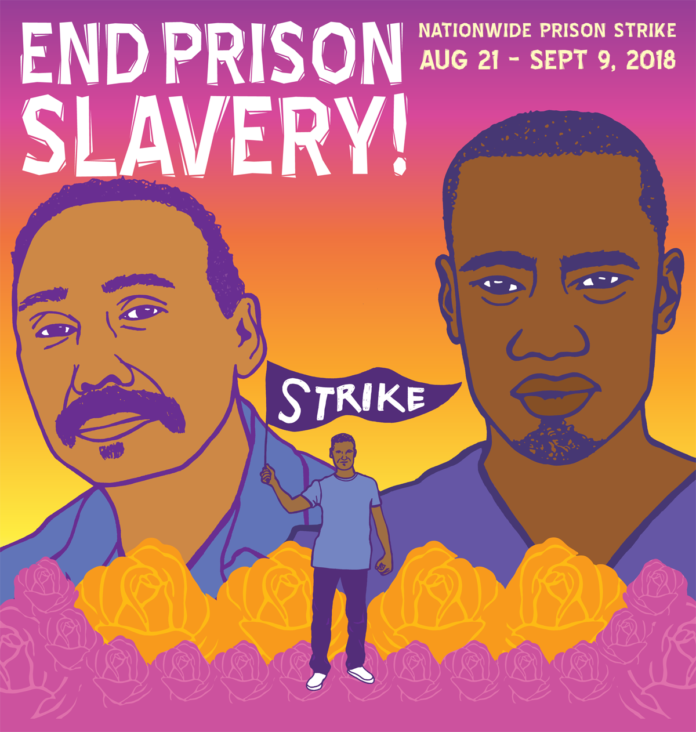 The following statement was released by the Palestinian prisoners of the Popular Front for the Liberation of Palestine, jailed by Zionist colonialism for their role in struggling for the freedom of their people. They are among nearly 6,000 Palestinians imprisoned by the Israeli occupation today. Their solidarity comes to extend fists of resistance and hands of unity through prison bars to support the U.S. National Prison Strike, beginning August 21.

Message of Solidarity to the US National Prison Strikers

We write today as imprisoned Palestinians of the Popular Front for the Liberation of Palestine, held in Israeli jails for our participation in struggle for the liberation of our land and people from colonialism and occupation. Today, we extend our solidarity to the prisoners in the jails of the United States participating in the national prison strike beginning on August 21, fighting exploitation, racism and capitalism from within the heart of imperialist prisons.

We begin by expressing our mourning for George Jackson, the imprisoned revolutionary and martyr of the Black Liberation struggle. The strike is beginning on the 47th anniversary of his martyrdom, an event that was recognized in Palestine and around the world at the time as an assassination of a true voice of struggle by the U.S. ruling class. As Palestinian prisoners, we also know that George Jackson was an internationalist and that the works of Palestinian poet Samih al-Qasem – addressing imprisonment and resistance – were found in his cell after his assassination. Today, we write to you to once again forge that connection of struggle, despite our different circumstances

The prison strike is a struggle of oppressed and exploited workers, first and foremost, confronting the unmasked brutality of capitalism behind bars. Around the world, prisoners have only protected their human rights and won victories through struggle. We know that you are demanding improved conditions, the right to fight in court for your rights and an end to excessive, lifelong sentences. You are also demanding an end to the new form of slavery found in U.S. prisons, where prison workers are paid pennies to produce goods and perform services for some of the country’s largest corporations.

We also salute your struggle against racism. U.S. settler colonialism and imperialism practices its vicious racism both internally and externally, and the prison system reflects that reality. Black communities, Latino communities, Arab communities are under attack, facing mass incarceration and a system that seeks to imprison and exploit rather than support and nurture youth and elders.

Today, prison workers are some of the most exploited workers in the United States, and the same ruling class that profits from the confiscation of Palestinian land and resources and from the bombing of children in Yemen also profits from the forced labor of prisoners. Your struggle is a workers’ struggle that is part of our global conflict against the vicious exploitation that our peoples face today. This struggle inside the prisons highlights the deep connections between racism and capitalism and how the struggle against them both can never be de-linked.

The boycott campaign that is part of your strike also emphasizes the critical role of boycott in confronting exploitation and oppression. While our circumstances and lives may vary greatly from one another in many ways, we too face economic exploitation through a “canteen” system that seeks to profit from our imprisonment as Palestinians. We know that prison profiteers in the United States also profit from prison canteens, phone calls and other purchases, and we salute your campaign of boycott. This is the same reason why we call on people around the world to join the boycott, divestment and sanctions movement against Israel. We cannot and must not be the consumers of those who profit from our misery and oppression.

As you enter your strike, we salute all of you and your struggle, and we urge all who are not already committed to join in the strike. We extend a special revolutionary salute to the imprisoned strugglers of the Black Liberation Movement and other liberation movements, including Mumia Abu-Jamal, whose consistent internationalism and principled struggle is known and resonates around the world. We demand the freedom of these freedom fighters in U.S. jails, from Leonard Peltier to Mutulu Shakur.

We know from our experience that it is through struggle and confrontation that true freedom can be realized. Your strike is being launched within the heart of U.S. imperialism, the greatest danger faced by our Palestinian people and the people of the world. We know that your victory will also be a victory for Palestine – just as our victories in Palestine will be a victory for all of the struggles against imperialism, racism and oppression in the United States and globally.

Graphic by Melanie Cervantes for the National Prison Strike