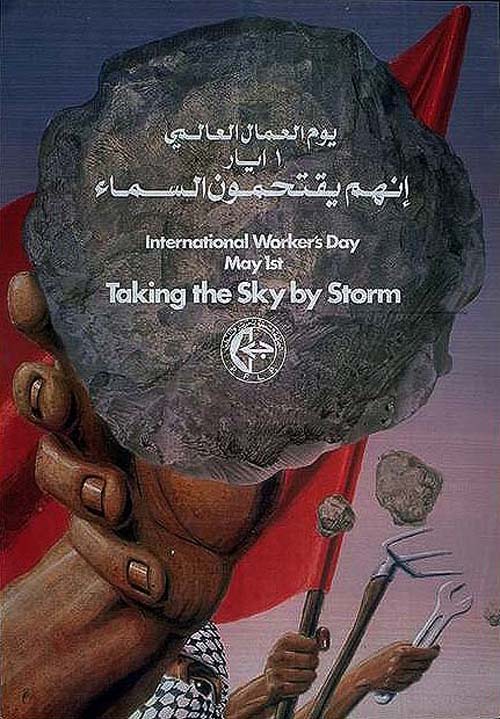 Ahmad Sa’adat, the imprisoned General Secretary of the Popular Front for the Liberation of Palestine, delivered a special message from prison to the forces and movements of the Left in the world on the occasion of International Workers’ Day, marking a renewed landmark of revolutionary struggle against imperialism, Zionism and fascism and the forces of class and social exploitation. Sa’adat said in the statement that the open-ended hunger strike being waged currently by the Palestinian prisoners’ movement is the most prominent national site of confrontation with the Zionist occupation and its racist settler-colonial laws. He urges the expansion of the campaign for boycott and the isolation of the occupation at an international level.

Revolutionary greetings,
Greetings of the Popular Front for the Liberation of Palestine,
Greetings to the strugglers for justice, freedom, equality and progress everywhere.

Greetings to you from inside the prisons and cells of Zionism, and salutes to all those who celebrate today, who march and participate in this day, in the lighting of the flame of this immortal, human, day, the first of May, the day of workers, the people, and the struggling classes. This is the day in which we together renew our primary commitment to defend the rights and interests of the impoverished and struggling classes with a fundamental interest in progress and change, the classes that were and still are the front line of the revolution, standing against the savage forces of capitalism, occupation, colonialism and racism.

Greetings from the camps of our people in the homeland and in the Diaspora, these Palestinian camps that were and still are strongholds of resistance, popular resistance and revolution, the birth of the front of popular classes, struggling workers, poor revolutionaries and revolutionary intellectuals. Our Palestinian camps, the incubator of the revolution and the popular intifada, are living these days under harsh and difficult conditions, both within and outside Palestine. Despite oppression, exclusion, marginalization and siege, the masses of our people continue to fight for their sacred right to return to their land and to the homes, villages and towns from which they were forcibly displaced.

Our message today is to all the revolutionary forces in Latin America and Africa, in the Philippines, Turkey and Greece, in the belts of misery and the struggling cities everywhere: The Popular Front for the Liberation of Palestine stands with you on May 1, renewing its commitment to the relentless and unconditional defense of the rights of the exploited, confronting the domination of colonialism, the forces of exploitation and the tools of class and social oppression. We call for the widest international left alliance to confront the camp of exploitation and capital and build the alternative, a socialist society.

May 1 was and will remain a day of struggle and adherence to the fundamental principles that the revolutionary, democratic left was created to achieve. The values of a society of justice, freedom and equality, working to consolidate the values of international and human solidarity to serve the people, for the well-being and dignity of humanity. One of our common tasks is to defend the rights of refugees everywhere and to defend migrants and the impoverished classes, especially those living in the midst of imperialist countries.

From here, from the Israeli prison cells, where our brave and beloved ones are fighting a new heroic epic that is entering its 15th consecutive day in the battle of the open hunger strike, we call upon you to uphold these values and put them into action by supporting the struggle of the prisoners and putting pressure on your governments to boycott, divest from and sanction the occupation state. The isolation of the occupation state, besieging it on a popular, international level, means that the date of freedom for our people and for all prisoners inside the prisons of “Israel” approaches ever more closely.

What is happening in the Arab world and the region generally demands that all the forces of the international left must unite and come together to face the threatened disasters, woes and wars in the region, especially if Trump and his right-wing racist, fascist camp succeed in implementing their plans to swallow the wealth of the Arab nation. And therefore, we in the Popular Front for the Liberation of Palestine call upon you to bang on the walls of silence in your society against the Trump camp, run today by a handful of generals and major corporations.

Today, the Israeli racist entity is further rooting its settlement laws and institutionalizing them in all of the details of the lives of the Palestinian people within the occupied territory and throughout our historic homeland, with the aim of imposing an enhanced form of subjugation based on oppression, exploitation, apartheid, siege and starvation. Israel is trying to impose this new order of subjugation on the masses of our people, inside occupied Palestine 1948, in the West Bank, in the Gaza Strip, in Jerusalem, even if some details differ here and there.

Our Palestinian liberation struggle is entering a new and difficult stage of struggle, but we have a deep confidence in the will of the masses of our people, our courageous workers, and their revolutionary capacities are firmly established and stronger than anything.

We promise that the Popular Front for the Liberation of Palestine will remain on the front lines to confront imperialism, Zionism and the forces of injustice and social oppression in Palestine and in the region. Because this is our responsibility. This is our duty. This is the path we choose to achieve our people’s goals of return, liberation, and the establishment of an independent Palestinian state on all of the land of historic Palestine with Jerusalem as its capital, the eternal and united capital of the Palestinian people.

Your comrade,
Ahmad Sa’adat
General Secretary of the Popular Front for the Liberation of Palestine
Ramon Prison
May 1 2017