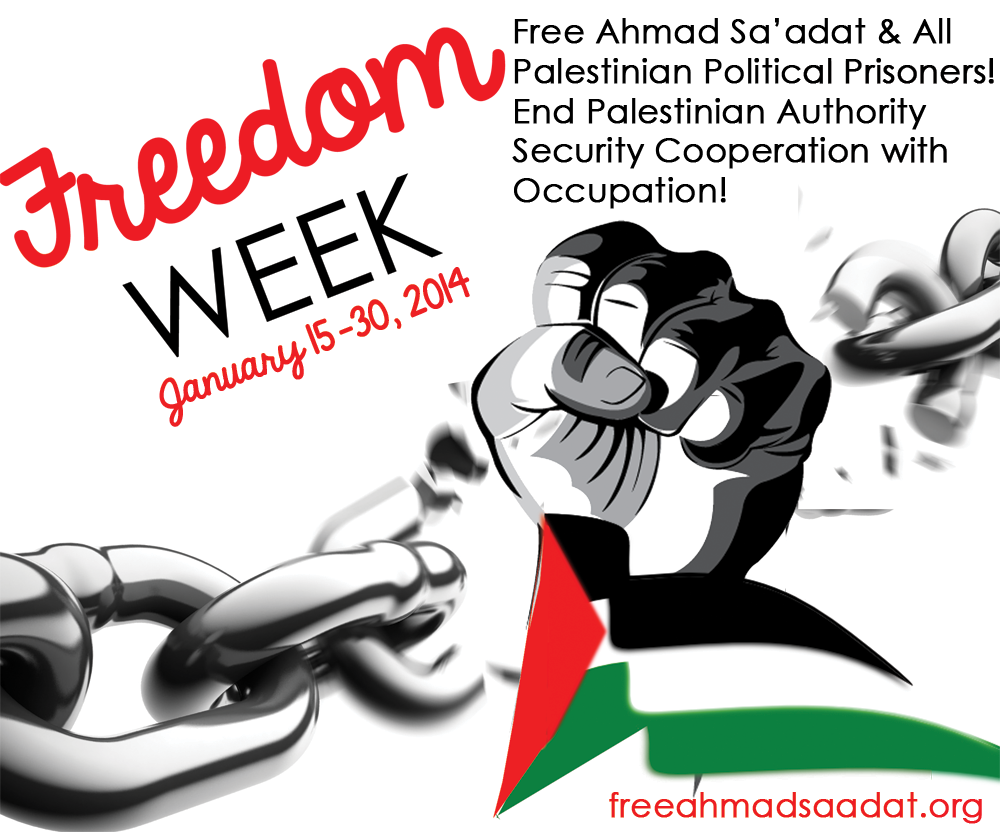 From January 15-30, 2014, raise your voices around the world for FREEDOM! Marking the 12th anniversary of the abduction of Ahmad Sa’adat by Palestinian Authority intelligence services, join the Campaign to Free Ahmad Sa’adat for FREEDOM WEEKS. Hold sit-ins, rallies, information tables or educational events in your area to call for Freedom for Palestinian Political Prisoners and an End to Palestinian Authority Security Cooperation with the Israeli occupier!

The imprisonment of Ahmad Sa’adat and his comrades is only the tip of the iceberg for Palestinians facing security cooperation with Israel by the Palestinian Authority in the West Bank. PA intelligence and “preventive security” services detain, interrogate and imprison hundreds of Palestinians, targeting the Palestinian resistance in the “security” interests of the Israeli occupation state – and against the rights and interests of the Palestinian people. The U.S., Canada and the European Union are directly involved in security coordination, providing millions of dollars and training to ensure it continues.

There are over 5,000 Palestinian political prisoners and detainees held in Israeli occupation prisons, including men, women, children, elders, critically ill patients, parliamentarians, students, workers and community and political leaders from the West Bank, Gaza, and occupied Palestine ‘48.  A number of Palestinian prisoners are severely ill – and facing medical neglect, mistreatment and abuse. Each day, Palestinians face arrest raids and abductions at the hands of Israeli military forces, torture and abuse in interrogation, and imprisonment for such charges as membership in a Palestinian political party or “incitement” against the occupation forces – or held arbitrarily without charge at all under administrative detention.

On numerous occasions, Palestinians formerly imprisoned in Israeli jails have been interrogated and detained by PA security forces, often shortly after their release; while Palestinians released from PA detention have been arrested by Israeli forces almost immediately following their return home. This “revolving door” has repeatedly been used to suppress Palestinian organizing and limit the impact of released prisoners on their communities. Meanwhile, Israeli officials like Ehud Barak and Yuval Diskin – while expanding settlements, demolishing homes, and besieging Gaza – have praised security coordination with the PA as vitally important in protecting the occupation’s security.

Posters and materials for use in your Freedom Weeks are available here: https://freeahmadsaadat.org/resources/

Use the form to let the Campaign to Free Ahmad Sa’adat know about your local action or email us at campaign@freeahmadsaadat.org. We will list your events on the Campaign website and publicize them.

For assistance and support in your activities, please contact the Campaign to Free Ahmad Sa’adat at campaign@freeahmadsaadat.org.