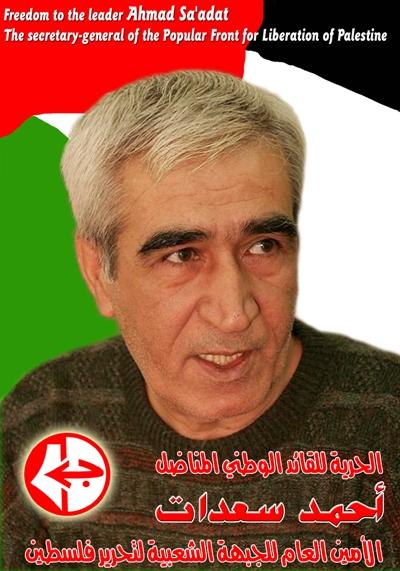 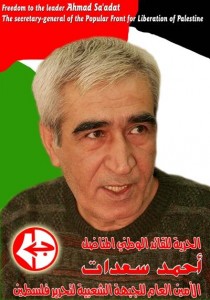 A new statement was released by Ahmad Sa’adat on January 29, 2012, written in Sa’adat’s Israeli prison cell on January 19, marking the tenth anniversary of his abduction. It was taken from the jail by a lawyer for broad distribution to the public. In the statement, in full below, Sa’adat holds the Palestinian Authority accountable for the crimes of security cooperation and political imprisonment, and demands an end to these policies in order to rebuild Palestinian struggle:

To our steadfast people, inside and outside Palestine, I salute you. I salute the martyrs of our people to the national struggle, one by one, who have paid with their lives and their blood, sacrificing for the land, the people and the national cause. I salute the prisoners of freedom in the Zionist prisons and detention centers, and everywhere in the world where the struggle for human freedom confronts injustice, abuse and tyranny. I salute all of you together, and pledge to remain on the path of struggle until the achievements of the objectives of those who have sacrificed, been captured or killed, in the struggle.

Today, I write to commemorate an event directly linked with the policy of political detention and security cooperation, obwing to the dictates of Israeli and U.S. policy, that have degraded and broken all of the rules of the national struggle and attacked the legitimacy of the resistance. Dozens are paying the price for this with their liberty in long years in the prisons of the occupation. Accordingly, this is a call and a cry to stop political arrests on the basis of membership in a political organization, or engaging in resistance to the occupation, and especially, that this policy must not continue or, worse, expand its scope under the auspices of the division to take on new names and dimensions. This is a call for an end to all violations of the freedom and rights of Palestinian citizens, and for democracy in all of its expressions. It is a call to end the division, implement internal agreements, and build consensus to achieve reconcilaiation and move away from fragmentation and conflict, splits and lack of democracy. National unity opens the door and lays the foundation for rebuilding the Palestinian house on a national and democratic basis, using the mechanism of direct elections and a system of proportional representation for all institutions, particularly the Palestine Liberation Organization. The PLO must be a mechanism for the unity of our people and national struggle, and represent all shades and expression of our political and social polity. National unity will result in re-building and the formulation of a national program to organize our movement and conflict with the occupation, setting as a priority our central and main struggle – confronting the occupation.

Such a program must remove us from the cycle of futile negotiations under any excuse or name (such as “exploratory meetings.”) It is an indisputable reality that these negotiations are entirely outside any reference to international law or United Nations resolutions, as it is a reality that they have failed, gone entirely to a dead end, and even served as a cover for the crimes of the occupation against the people, land and holy sites. What is needed is a program based on the resistance and confidence in our people’s ability to achieve victory, and based in political and diplomatic struggle to implement United Nations resolutions and move our cause there. The international community must be held accountable for its responsibility to make the occupation comply with international law, and to make it clear that the occupation is not above the law, and to force it to implement the international resolutions that protect our people’s national rights, foremost the right of return, self determination, and the establishment of a sovereign state with its capital in Jerusalem.

Finally, this is a call to prioritize the struggle of the prisoners, in order to preserve the achievements of their struggle, support their just and humanitarian demands, and mobilize efforts to build their struggle on an international level, in particular emphasizing their political and legal status as prisoners of war under international law and the Third and Fourth Geneva Conventions, and to provide protection for them in the context of demanding protection for all of our people.

In conclusion, I salute you and assure you that the road is full of challenges, but I am confident that we will be able to achieve victory, not only by achieving our national unity, but with Arab revolutions and regional and international change.

Glory to the martyrs, freedom for the prisoners, and dignity for our people.