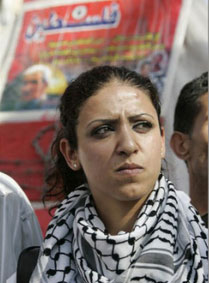 Sumoud Sa’adat, speaking on behalf of Addameer Prisoner Support and Human Rights Association, and the daughter of imprisoned Popular Front for the Liberation of Palestine General Secretary Ahmad Sa’adat, spoke to Al-Masry al-Youm on January 27, 2012, saying that she had no information about the alleged inclusion of the name of her father on a list of prisoners presented by the Palestinian Authority to Israel, calling for their release, in preparations for negotiations.

Sa’adat said that “we reject this approach to negotiations; it is the wrong approach and does not free the prisoners. Negotiations based on the conditions and dictates of Israel and the U.s. cannot achieve any of the Palestinian people’s rights, including the rights of prisoners…we have tried this approach for 28 years and it does not offer anything for our rights or our cause.”

Sumoud Sa’adat said further that “The priority at the present time is implementing internal national unity and reformulating a national program to organize our struggle against the occupation….as long as there is occupation, there will be arrests. Arrests continued after the Shalit deal and are increasing; children are being arrested and threatened with land confiscation; members of the Palestinian Legislative Council are being arrested; all in an attempt to undercut Palestinian national unity.” She also noted that this has extended to the violation of buildings under international protection, including the storming of Red Cross headquarters in Jerusalem and the kidnapping of two PLC deputies from inside the building.