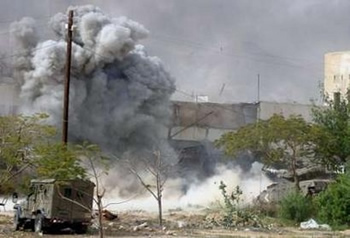 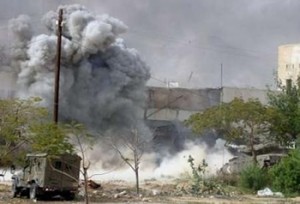 At this time, the Israeli Occupation Forces armed with bulldozers and tanks are destroying and shelling the Jericho prison where the General Secretary of the PFLP Ahmad Saadat and his comrades are now being held prisoners for the past four years. More than 100 other prisoners are also surrounded and are terrorized. The British and the American guards in the prison are complicit with the Israelis on this crime as they evacuated the prison shortly before the Israeli Fascist Army began their attacked.

There are injured prisoners who have not been evacuated. The prisoners are suffocating from the fires and the fumes. Three Palestinians were killed, and 35 have been injured in the attack. 800 children are confined to their school all day.

We are calling Palestinians and their allies to protest this Israeli crime and hold the US and the British administrations responsible for the continuing genocidal crimes committed against the Palestinian People.

We call upon you to demonstrate in front the Israeli, British and American Embassies worldwide, to contact your Ministries of Foreign Affairs, Members of Parliaments and Human Rights organizations to stop this Israeli crime.

International Committee to Release Ahmad Sa’adat and his Comrades.