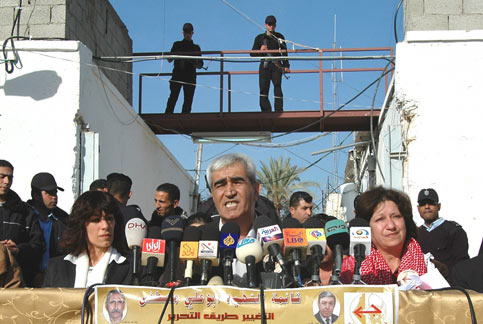 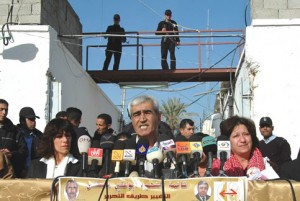 January 12, 2006 marked the fourth anniversary of the illegal imprisonment of Ahmad Sa’adat, General Secretary of the Popular Front of the Liberation of Palestine (PFLP), who has been detained without charges by the Palestinian Authority since 2002. Sa’adat’s imprisonment, in violation of Palestinian and international law, has followed no trial, nor has he been charged with or convicted of any crime. He is a political prisoner in the fullest sense of the term, imprisoned at the behest of the United States, Great Britain, and Israel, for his activity and leadership in the PFLP. Sa’adat’s case – and that of his comrades imprisoned with him in Jericho – is unique, because he is not being held directly by the Zionist state – instead, he is being held in a Palestinian Authority prison, watched over by British and U.S. guards.

Sa’adat was joined as a political prisoner by four of his comrades in the PFLP (Hamdi Quran, Basel Al-Asmar, Majdi Rimawi and Ahed Gholmi) on April 25, 2002, when the four were tried in an impromptu military court of the Palestinian Authority—as demanded by the United States and Great Britain as a condition for the end of Israel’s siege of the Muqata’a, the presidential palace of the Palestinian Authority (PA). With Israeli tanks directly outside the Muqata’a, Quran, Al-Asmar, Rimawi and Gholmi were tried and sentenced for the December 2001 assassination of extremist Israeli tourism minister Rehavam Ze’evi. Despite their civilian status, the four were tried before a military court presided over by Brigadier-General Ribhi Arafat, who has no legal standing to act as a judge. They were not allowed to have attorneys or proper legal defense in a trial that took a total of two hours. No evidence, no confessions and no statements were received in order to convict the four; all were found guilty and the verdicts immediately ratified by PA President Yasser Arafat, and the four were given no right to appeal the verdicts.

After the sentencing, the four were transferred, with the uncharged and untried Ahmad Sa’adat, to Jericho Prison, ostensibly under the control of the PA, but subject to the guardianship of United States and British forces. The director of the US/British “supervision” of the prisoners at Jericho Prison formerly ran the infamous Maze Detention Center for Britain in the North of Ireland. The prisoners are not subject to Palestinian sovereignty and authority, but rather to the conditions and demands of the United States and Great Britain. The flagrant violations of both Palestinian and international law embodied in the detention of Sa’adat and his comrades highlight the deep hypocrisy in US/British calls for “reform” of the PA and parallel the U.S. and British attempts to interfere in the Palestinian elections, and threaten and intimidate the Palestinians of the West Bank and Gaza into voting for the preferred candidates of the U.S., British and Zionist regimes. Their attempts to interfere in the elections, alongside their continuing imprisonment of Sa’adat and prevention of his communication with the media and his comrades -necessary for his campaign – prove their utter disregard for Palestinian democracy and Palestinian law, and reveal their commitment to attempt to repress the Palestinian national struggle for liberation and self-determination. As the United States tries to create a proxy regime in Iraq while running rigged elections, it is trying its best to undermine Palestinian self-determination and democratic internal practices. The illegal imprisonment of Sa’adat and his comrades is part and parcel of the international strategy of the “war on terror,” whereby the United States and Great Britain wage illegal and inhumane wars, violate national sovereignty and self-determination, and incarcerate and repress political prisoners in order to wage a war on popular resistance to their designs upon the Arab nation – and the world.

Sa’adat and his comrades are held under intolerable conditions in Jericho Prison—conditions that have steadily worsened. They have been secluded from one another and not allowed to communicate. They have been denied access to newspapers and books, visits from family and others, telephone use, and daily exercise outside their prison cells. Water and electricity in their cells have been turned off, and numerous other punitive measures have been implemented against them. In response, Sa’adat and his comrades have engaged in two hunger strikes, demanding an end to inhumane treatment and their immediate release. Now, during the elections, at a time when media access and access to political comrades, as well as to family and friends, is critical for the full participation in the PLC elections, Sa’adat and his comrades’ communication with the outside has been severely restricted. This is a violation of Palestinian democracy and an affront to self-determination, and the Palestinian Authority must put an end to this injustice.

The imprisonment of Sa’adat and his comrades is an affront to international law, human rights and justice. It is an attack on the ability of Palestinians to organize and resist occupation and oppression, and has resulted in the institution of an illegal prison regime—in direct contravention of Palestinian sovereignty. It is an attempt to undermine Palestinian self-determination, using the mechanisms of the Palestinian Authority to provide for U.S., British and Zionist control over Palestinian political affairs.

Free Ahmad Sa’adat and his Comrades from Jericho Prison!