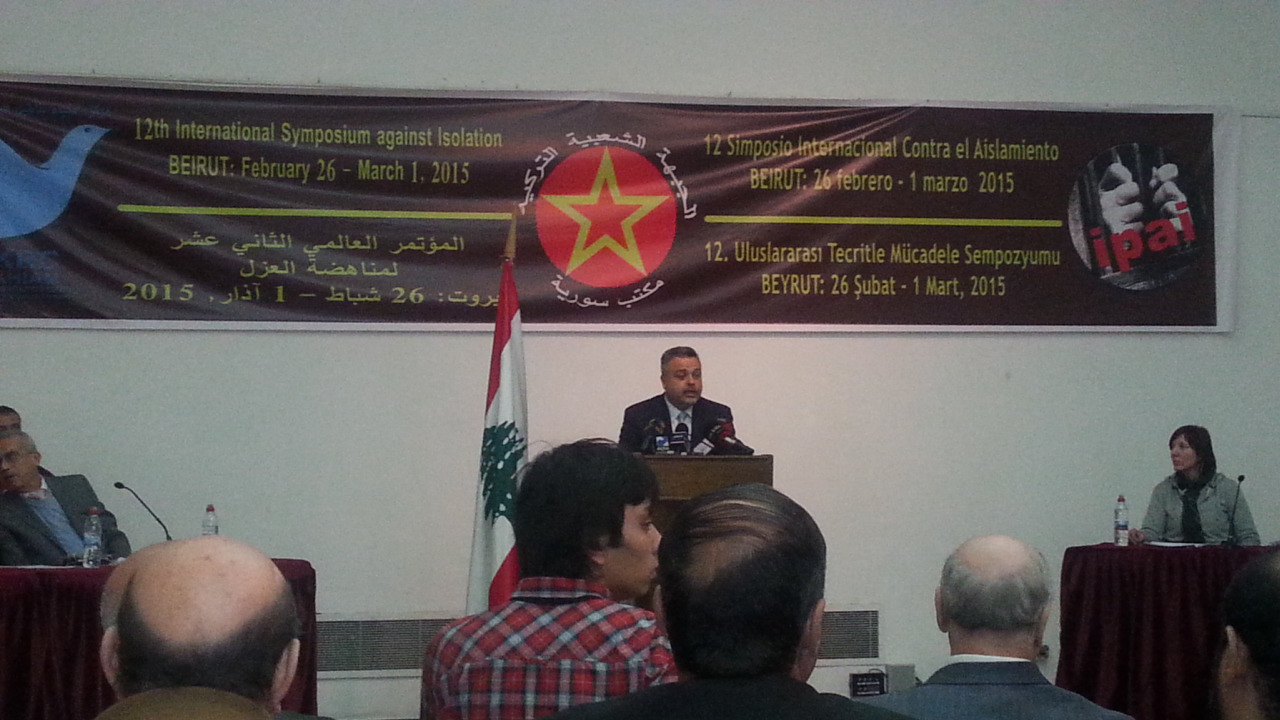 The Campaign to Free Ahmad Sa’adat participated in the International Platform Against Isolation conference in Beirut on February 26-March 1, alongside political prisoner solidarity organizations and movements from around the world.

The Campaign, represented by Charlotte Kates of Samidoun, joined a panel including Addameer, the Palestinian prisoner support and human rights association; family members of Georges Ibrahim Abdallah; numerous Lebanese veteran strugglers and former prisoners in Israeli prisons in southern Lebanon; and political prisoner organizations from Ireland, the Basque people, Turkey and Bahrain. The conference included presentations from Palestinian political parties, including Sa’adat’s Popular Front for the Liberation of Palestine, Lebanese resistance organizations and political parties, and international organizations, including the US-based Jericho Movement and the Bolivarian Movement of Latin America. The conference included a visit to the former occupation prison of Khiam in southern Lebanon, and the open-air museum of occupation and resistance in Mleeta, as well as a concert including Palestinian music, folkloric debkeh, and featuring a performance by internationally renowned Leftist Turkish band, Grup Yorum.

IPAI has a long history of standing with Palestinian political prisoners, and in particular, the campaign to free Ahmad Sa’adat. The Campaign delivered the following message at the conference:

Palestinian Prisoners and Prisoners of the Cause of Palestine: Free Ahmad Sa’adat

Today, as we await yet another verdict, over the 30 years of imprisonment of Georges Ibrahim Abdallah in French prisons, 30 years of the confinement of this anti-imperialist, revolutionary Lebanese Arab struggler for Arab liberation and for Palestine, within the prisons of the French state. And this imprisonment represents French imperialism, its relationship with U.S. imperialism and with the Zionist state. It is not separate from the imprisonment of thousands of Palestinian prisoners behind bars in Israeli prisons.

Ahmad Sa’adat, the General Secretary of the Popular Front for the Liberation of Palestine, has been imprisoned by Israel since 2006 – and before then, by the Palestinian Authority, under US and British guard, since 2002. He and his comrades were kidnapped in a military invasion of Jericho prison, where he had been held despite a ruling of the Palestinian Authority’s high court that he must be freed. He is now serving a 30-year sentence in Israeli prisons for “incitement” and for holding a position in a “prohibited organization.” It should be noted that all Palestinian political and resistance-oriented organizations are prohibited by military order officially, including student unions, labor organizations, and women’s associations.

He has repeatedly been suddenly transferred from prison to prison, and three of his children have been denied Israeli security permits to visit their father since his imprisonment. Now, Israel’s prison authorities are using another tactic to isolate Sa’adat – the denial of family visits. Family visits are a lifeline for Palestinian prisoners. Frequently conducted through glass, for short periods and every two weeks at maximum, these family visits enable Palestinian prisoners to remain connected to their parents, children and siblings. Therefore, they have been used as a weapon in the hands of the Israeli prison administration on numerous occasions to not only collectively punish Palestinian prisoners, but also their families, through the denial of family visits.

The mass imprisonment of Palestinians is a key mechanism in the maintenance of the apartheid system throughout Palestine. The struggle for freedom is not only the struggle of these 6200 people for freedom, but that of the Palestinian land and people. No nation can truly achieve its self-determination when thousands of its leaders, organizers and strugglers for freedom are locked up in the jails of the occupying power. The freedom of Palestinian prisoners and leaders like Ahmad Sa’adat is necessary to conceive of – and achieve – liberation, freedom, return and self-determination for Palestinians.

It must be noted that imprisonment affects all Palestinians and all who struggle for Palestine. Palestinian prisoners are on the front lines of struggle, and as such they confront all of the enemies of the Palestinian cause: reactionary regimes, the Palestinian Authority (which engages in security coordination with the occupier), and at the forefront, imperialism and Zionism, which means that the intelligence agencies and security services of imperialist powers work hand in hand with the Zionist state and its intelligence agencies to suppress organizing for Palestinian liberation.

It should be noted that the case of Ahmad Sa’adat in many ways represented this convergence of forces. In 2002, when Sa’adat was first arrested, he was arrested by the Palestinian Authority and held with Yasser Arafat at his compound in Ramallah with his comrades. In a deal between the PA, the Israelis, the US and the British, Sa’adat and his comrades were then transferred to the PA’s prison in Jericho where they were held for four years, nominally under Palestinian control but under US and British guard. Even the PA’s own high court ordered Sa’adat’s release – but imprisoned he remained, until in 2006, the Israeli military attacked the prison (concerned that new PA elections might mean the release of Sa’adat and his fellow prisoners) and removed him and his comrades to Israeli prison where they remain since then.

Just as all Palestinians inside Palestine (in 48, Jerusalem, WB and Gaza) are impacted by this labeling, criminalization and racist oppression, Palestinians and Arabs outside – in Arab states and in the West – are also impacted by this labelling, as are supporters of the Palestinian cause. The terror label is used to justify massive racist repression against entire communities, police and intelligence surveillance and infiltration of neighbourhoods, organizations and movements.

The creation of the so-called terror lists came in response to “threats to the Middle East Peace Process” – the Oslo process, which is fundamentally unjust and based on the liquidation of Palestinian rights, first and foremost the right to return. This was meant to criminalize anything that would threaten the Oslo process, or the cementing of imperialist and Zionist domination of Palestine with the complicity of the Palestinian Authority, the representative of a very small layer of Palestinian capitalist interests.

These terror lists include all Palestinian resistance organizations, including the Popular Front for the Liberation of Palestine, and attempt to criminalize financial or other “material” support for these organizations. Movement to challenge these laws is particularly important in order to defend not only the Palestinian struggle but the right to anti-colonial resistance and liberation struggle everywhere.

And so we also see Palestinian political prisoners – and prisoners of the Palestinian cause – outside Palestine, in imperialist jails.  In addition to the case of George Ibrahim Abdallah, we see longtime Palestinian community leader Rasmea Odeh in the United States fighting imprisonment and deportation – because she is a former Palestinian political prisoner, who, as a prisoner, was subject to horrific torture and sexual assault, documented before the United Nations. We see the “Holy Land 5” in US jails, 5 Palestinian community leaders imprisoned in US prisons and serving sentences of up to 65 years for donating to Palestinian charitable organizations that the US government alleged to be connected to Hamas  – even though USAID, the US’s development organization that it uses to implement political control over struggle in Palestine, had donated to the same organizations.