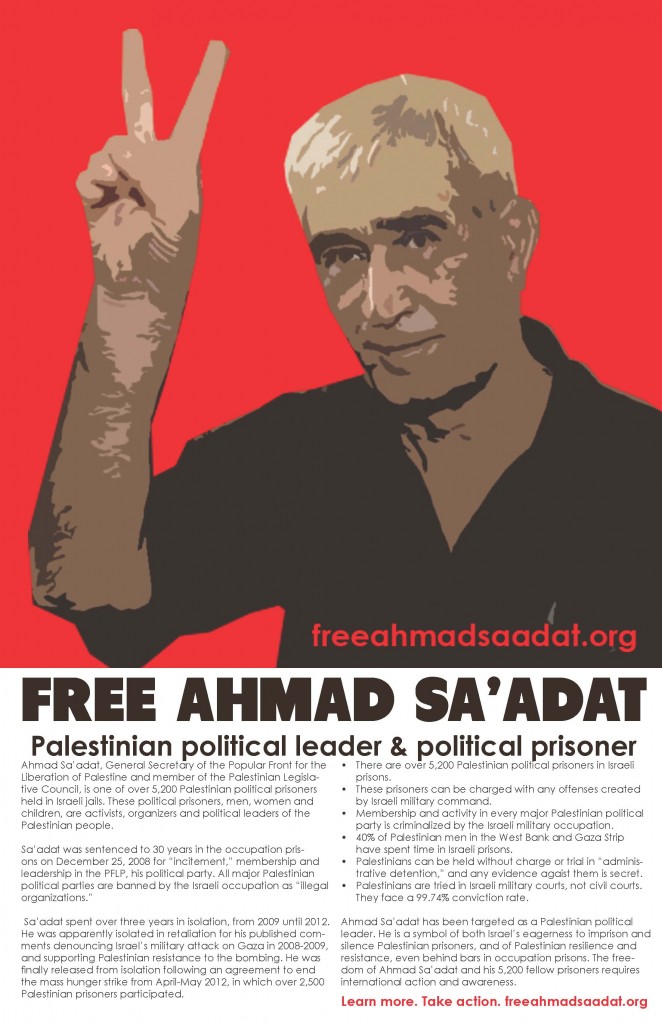 On March 14-15, 2006, eight years ago, Israeli military forces surrounded the Palestinian Authority prison in Jericho, where Palestinian national leader Ahmad Sa’adat was imprisoned with his comrades, Ahed Abu Ghoulmeh, Majdi Rimawi, Basil al-Asmar and Hamdi Qur’an, attacking and destroying the prison itself while abducting the Palestinian prisoners of freedom held inside. While in Jericho, Sa’adat and his comrades – and fellow prisoner Fouad Shubaki – were held under United States and British guard, who left Jericho prison in advance, knowing that it would soon come under heavy attack from Israeli weaponry (often itself US-manufactured, funded and supplied.)

Sa’adat and his comrades were kidnapped as the Israeli army laid siege for twelve hours, attacking the Palestinian Authority prison with bulldozers and tanks, killing two Palestinians and injuring twenty-three more. Eight years on, as Sa’adat and his comrades number among 5200 Palestinian political prisoners behind bars of the occupation, it is more urgent than ever that people act and demand their freedom, and the freedom of all Palestinian prisoners. We particularly note the crisis of sick prisoners facing death behind prison walls.

Today, Ahmad Sa’adat called for escalating the campaign, focusing specifically on the sick prisoners suffering medical neglect and abuse in the dungeons of the occupation, urging international exposure of the crimes of the occupation in order to “save the lives of the prisoners held for slow death in the Ramle prison clinic.”

This anniversary demands, once more, that it is long past time to bring the Palestinian Authority’s shameful, dangerous, threatening policy of security cooperation with the Zionist state to an end. This policy is responsible for the imprisonment of Sa’adat and his comrades in a Palestinian Authority prison to begin with; it plays a significant role in continued suppression of resistance. Its echoes are felt in the ongoing arrest raids and assassinations targeting Palestinian activists. Sa’adat and his comrades were not abducted from their home but from a PA jail which had held them – contrary to Palestinian law and Palestinian court orders – for over four years.

Furthermore, the case of Ahmad Sa’adat and his comrades highlights the central complicity and responsibility of the U.S. and British states, and their historical and present-day imperial and colonial interests in Palestine, in the imprisonment of Palestinian leaders and fighters and the colonization of Palestine by the Zionist movement. United States and British guards’ presence was justified as “protection,” when in fact they left in a coordinated fashion immediately prior to the attack of occupation forces, leaving an open area for their assault. This collusion must be exposed once more, particularly when Palestinian Authority officials seek to accept imperial “NATO forces” on Palestinian land suppressing resistance.

Meanwhile, on the political level, the US not only funds and provide the weaponry that attacks, abducts and assassinates Palestinians, but provides the critical political foundation for the so-called “negotiations” process that threatens the core of the Palestinian cause, the right of return of Palestinian refugees, and seek to impose a defeatist solution upon the Palestinian people to serve the interests of US imperialism.

And it should not be forgotten that some of the earliest pages of Palestinian prisoners’ poetry were written in British jails as they were imprisoned en masse as they fought the colonialism of the British and the Zionist movement in the 1920s and 1930s, and that Palestinians were detained without charge and their homes demolished by British military orders as a British lord sought to grant the land of Palestine to the settler colonial Zionist movement.

Yet, despite these forces arrayed against the Palestinian liberation movement and resistance, eight years after the abduction of Ahmad Sa’adat and his comrades, the resilience and steadfastness of Palestinian prisoners remains legendary. They are an international symbol of political steadfastness in the face of colonialism. Their names echo in salute to comrades in the struggle for liberation around the world: Nelson Mandela, Bobby Sands, Victor Jara.

And the call for the freedom of Ahmad Sa’adat is also a call for the liberation of all prisoners of racism, imperialism and settler colonialism: from Leonard Peltier, Mumia Abu Jamal, and Oscar Lopez Rivera, to Zara Alvarez, Ricardo Palmera, the Cuban Five, and every prisoner of freedom held for seeking the liberation of their people. It must also be a call for the freedom of Georges Ibrahim Abdallah and all Palestinian political prisoners held in international jails; Abdallah has been victimized for over 28 years in French prison on trumped-up charges and remains imprisoned today because of the power of US imperialism to undercut even French court rulings.

The valiant struggle of Palestinian prisoners achieved the end of isolation of Sa’adat and fellow Palestinian leaders after over three years in a mass hunger strike. Their daily confrontation with the occupation behind bars must remind all of us internationally of our duties to seek justice, freedom and liberation for these thousands of Palestinians and for the self-determination, return, and liberation of the entire land and people of Palestine itself.

3. Write to the International Committee of the Red Cross and other human rights organizations to exercise their responsibilities and act swiftly to demand that prisoners’ rights are recognized. Email the ICRC, whose humanitarian mission includes monitoring the conditions of prisoners, at JER_jerusalem@icrc.org.

4. Use the form to let the Campaign to Free Ahmad Sa’adat know about your local action or email us at campaign@freeahmadsaadat.org.

WHO IS AHMAD SA’ADAT?

Ahmad Sa’adat, the General Secretary of the Popular Front for the Liberation of Palestine, was elected to his position in 2001 following the assassination of the previous General Secretary, Abu Ali Mustafa, on August 27, 2001 by a U.S.-made Apache missile shot from an Israeli military helicopter as he sat in his office in Ramallah. PFLP fighters retaliated by assassinating Rehavam Ze’evi, the racist extremist Israeli tourism minister and head of the Moledet party, notorious for his political platform based on the “transfer” or ethnic cleansing of Palestinians, on October 17, 2001.

Sa’adat was abducted by Palestinian Authority security forces after engaging in a meeting with PA officials under false pretenses in February 2002, and was held in the Muqata’ PA presidential building in Ramallah until April 2002, when in an agreement with Israel, the U.S. and Britain, he and four of his comrades were held in the Palestinian Authority’s Jericho prison, under U.S. and British guard.

He remained in the PA jails, without trial or charge, an imprisonment that was internationally condemned, until March 14, 2006, when the prison itself was besieged by the occupation army and he and his comrades were kidnapped. While imprisoned in the PA jail in Jericho, he was elected to the Palestinian Legislative Council. Since that time, he has been held in the prisons of the occupation and continually refused to recognize the illegitimate military courts of the Israeli occupation. He was sentenced to thirty years in prison on December 25, 2008 solely for his political activity, including membership in a prohibited organization, holding a post in a prohibited organization, and incitement.

Born in 1953, Sa’adat is the child of refugees expelled from their home in the village of Deir Tarif, near Ramleh, in the 1948 Nakba by attacking Zionist forces and is himself a refugee denied his right to return along with six million others in Palestine, in the refugee camps in the Arab world and in exile and diaspora internationally. A math teacher by training, he is married to Abla Sa’adat, herself a noted activist, and is the father of four children. He has been involved in the Palestinian national movement since 1967, when he became active in the student movement. Prior to his abduction from Jericho in 2006, he had been held at various times as a political prisoner in Israeli jails, for a total of ten years.