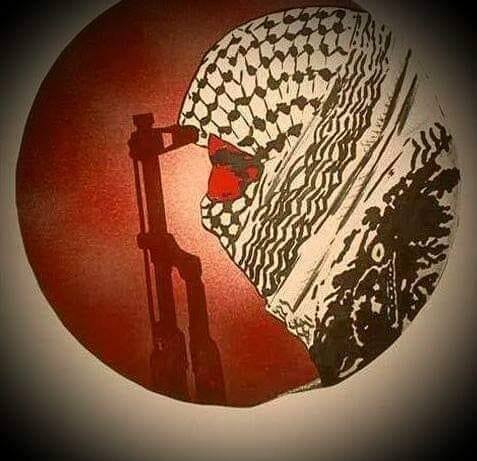 The following piece, by the international coordinator of the Campaign to Free Ahmad Sa’adat, was originally published in Arabic at Al-Adab. Minor edits were made by the author to the English version.

It is a responsibility and a primary task of the Palestinian armed resistance to bring down the liquidation project, the U.S.-Zionist-reactionary “deal of the century.” The resistance weapon, after all, are not meant for stockpiling or formal display, but for the protection of the people’s national rights and dignity. It is a weapon for liberation.

Alongside arms, all forms of mass popular struggle must be escalated, especially those effective and tested mechanisms which have struck thousands of blows against the enemy: the popular intifada and the boycott movement. The organizing of Palestinian communities in the diaspora  and the uplifting of their rightful role is critical to invigorating this popular struggle around the world.

The strengths of the Palestinian people are many; they are important, and they are able to confront the liquidation project as they did in the past. However, there are also certain important conditions for success, notably: trustworthy national leadership, revolutionary political will, a unified and clear plan of action, and the participation of the broadest Palestinian popular sectors in confronting the schemes of the occupation and the ongoing path of neglect and surrender represented by the Palestinian Authority (and some marginal factions associated with it.)

More precisely, confrontation requires first, the burial of the dependent and compromised “Palestinian entity,” and the overthrow of the path of surrender represented by the Palestinian Authority.

Lessons from past experience

The Palestinian resistance was previously unable to prevent the occurrence of Oslo (September 1993) and subsequently failed to rein in the resulting path of surrender and alienation taken by the official Palestinian leadership. Let us recall the announcement of the “Alliance of the Ten Factions” in Damascus (Hamas, Jihad, PFLP, DFLP, General Command, etc…) that vowed to bring down Oslo. Where is it today?

Let us remember that in the mid-1990s, this alliance called for an end to the “disastrous betrayal agreement,” an entirely correct description, and held many meetings and conferences to this end. But it faded away, and the Oslo entity remained, operational in service of the occupation and installed daily and materially on Palestinian soil, under the auspices of the enemy camp: U.S. imperialism, the European Union, and the most reactionary Arab regimes.

Indeed, we remember the repellent phrase that Al-Hayat newspaper in London reported in an interview with Mahmoud Abbas after the signing of Oslo, when they asked him about the formation of this alliance, and he said: “These factions will return to the ‘House of Obedience’.”*

Did they in reality return to the “house of obedience”?

Today, the transition from the verbal rejection of the “deal of the century” and the imperialist liquidation project to a program of actual confrontation first requires a complete break with the delusions of the Oslo Authority and the leadership of the PLO. This includes the abandonment of the small privileges that the Oslo apparatus offered to some forces, personalities and officials. If we are unable to deter the enemy camp, are we also unable to overcome the internal constraints that prevent the development or advancement of a political strategy for liberation?

It is rational to affirm that our struggling Palestinian people, with a long historical experience in confronting colonialism, can rebel against the path of the Palestinian Authority and turn the table over everyone’s head, with determination to protect their existence, identity and rights. Being a Palestinian does not carry a privilege, instead it carries a national, Arab and human responsibility towards this major issue, because Palestinians – whether we like it or not – are the head of the spear of the Arab nation as a whole in confronting the Zionist entity and its project in Palestine.

The need for a different response

With every new catastrophe or political concession by the PLO leadership, we find something similar to a directionless panic (faza’a)** of the faction leaders, who circulate between the offices of Al-Jazeera, Al-Mayadeen and Al-Arabiya to respond. However, the Zionist enemy does not care about what this or that Palestinian official says, but they do care a great deal if the cadres and the struggling bases of the resistance forces and the Palestinian people move into confrontation to achieve specific goals, to put a stop to the path of surrender in the Palestinian and Arab arenas and defeat their project.

The confrontation does not have to take the same form everywhere and in every location of the Palestinian people. The priority is to establish a new historical phase, the first step is to unleash the huge potential of Palestinian popular energies that is being held back by the “faction leaders,” who in essence reflect the program of the Palestinian bourgeoisie. Here we must separate between the activists, members and supporters of the factions on the one hand, and their leaders who are always ready for a new compromise with the Oslo team on the other. These “leaders” are not looking for the radical change necessary to protect the rights of the Palestinian people. They are not looking for victory, but repeat slogans behind slogans, most notably “reconciliation,” “national unity” and other phrases that have become the focus of popular dissent. This framing too often provides cover for the Palestinian Authority under the slogans of “statehood,” “national project” and “independent Palestinian decision.”

All of these slogans are fundamentally meaningless and without value, and can exacerbate the feelings of anxiety, confusion and despair among the supporters of these organizations. These positions do not offend the enemy, nor do they please our friends.

Yes, there are urgent Palestinian national tasks that should not be escaped. Otherwise, we will repeat the rumination and chewing of the air, while the Zionist enemy continues its project and creates more “facts on the ground.” It does this first with iron and fire, bulldozers and tanks, and then “discusses” it after, and then harvests the results. Whatever the enemy takes is then accepted, implicitly, by the Oslo group. Ask yourself, why did this group stop mentioning, for example, the wall of theft and annexation? When did you last hear Mahmoud Abbas demanding the wall be brought down?

What then to do? How do we face a Palestinian leadership that exercises a monopoly over the PLO and used that option to secure their own interests only?

This is a current that has repeatedly declared that “security coordination with Israel is sacred” and that what it wants most is Israel’s commitment to the Oslo agreements.

This is a current that, through its security forces, is directly linked with the Zionist entity, U.S. intelligence agencies and reactionary regimes’ security agencies. It criminalizes Palestinian armed resistance forces and arrests their cadres of the student, youth and trade union movements, even if they have no involvement with weapons. It targets the program and positions of the Palestinian struggling armed resistance, so that it remains in a defensive mode and does not move forward to the realm of initiative and action.

This is the current agenda, reflecting the program of the enemy in full swing.

Behind words and weapons

Three underground cells in occupied Palestine in the 1970s and 1980s prevented the enemy from carrying out its plan, known as the “Village Network.” Shimon Peres is noted to have said that “the bullets that hit Zafer al-Masri’s heart hit the heart of the settlement project.”

There is, today, in the occupied land, an armed Palestinian “authority,” led by well-known personalities linked to and trusted by the U.S. intelligence agencies, the Mossad and the Zionist security establishment, and carrying out its own project. The Palestinian Authority, in the final analysis, reflects a synergy of influence and interests between large Palestinian capitalists and the military interests of the U.S. in the West Bank. (similar to the contras of Nicaragua and other local reactionary forces in nations targeted by imperialism).

A unified resistance front against the clients and compradors

The Palestinian comprador sectors that live as parasites on the Palestinian cause will not give up their privileges unless they are concerned that they will lose everything: their economic interests, their banks, their companies and everything else, if necessary. Hence, an alternative Palestinian revolutionary project is needed: one that embraces the entire Palestinian people, is linked to its Arab depth and to all of the forces of revolutionary change in the world.

Without a popular response to the Palestinian Authority’s project and without entering into a direct confrontation with the occupation and its agents, we will continue to move in a vicious circle and the enemy will continue to impose its cold “facts” on Palestine and the region.

This question today must motivate the resistance forces: What are the facts of the Palestinian people that we can impose on the ground?

A final word: On the role of Palestinian intellectuals

Many Palestinian intellectuals have betrayed their role in serving the armed struggle or in theorizing a resistance-oriented Arab liberation project, and they have failed to tell the truth. A number of them have taken on the positions or sponsorship of a reactionary regime, or were caught up in the mechanisms of the Palestinian Authority or the neocolonial institutions called NGOs. Therefore, we are in urgent need of a radical  revolutionary patriotic approach to culture, under the title: new culture for a new fedayee (freedom fighter). The fedayee is the opposite of and the alternative to the policeman as the symbol of not only the Palestinian weapon but the Palestinian identity, people and cause.

Most of Naji al-Ali’s drawings, and most of the writings of Ghassan Kanafani, revolve around the internal Palestinian situation. This was not a coincidence or the result of a lack of knowledge or curiosity about the conditions of the enemy, but rather they considered the focus on the internal front a priority in order to confront the consequences of defeat and aggression, stop the attacks on the rights of the popular classes, the dispossessed and the refugee camps, and to propose solutions. They knew that the more the Palestinian movement is recovered and strong, the more effective and stronger the Palestinian action in confronting the Zionist enemy.

All of Naji and Ghassan’s work was aimed at not reaching the point of this “deal,” whether from the gate of incompetence, betrayal or complicity!

* This refers to a practice in which husbands can make wives who wish to leave them return home against their will, an analogy which itself reveals Abbas’ reactionary framework.