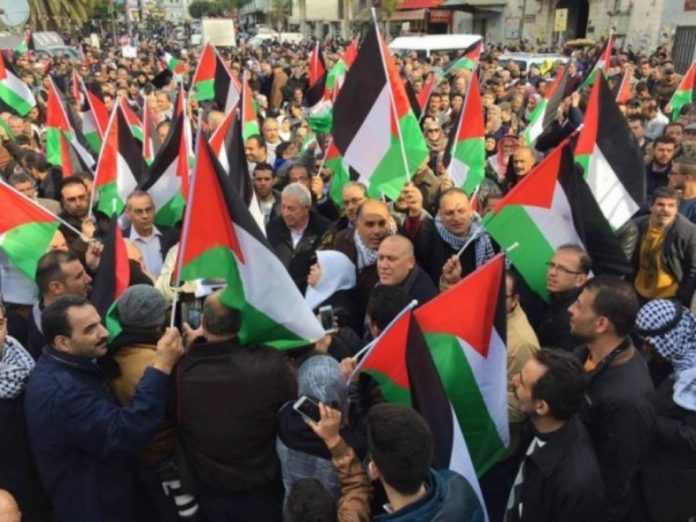 The following article, by Khaled Barakat, the international coordinator of the Campaign to Free Ahmad Sa’adat, appeared first in Quds News Network (in Arabic).

There are no longer many roads or options available to the Palestinian people other than rejection and popular revolt against the historical stage that can be described as the “stage of the Authority.” This historical moment was developed on the basis of an agreement between the Palestine Liberation Organization and the Zionist entity under U.S. direct sponsorship. The terrible and disastrous agreement known as the “Declaration of Principles,” signed behind the backs of the Palestinian people in closed rooms, does not bind our people to anything. However, its catastrophic outcome was parallel to the Nakba of 1948: The Palestinian Authority, an entity without popular, revolutionary or even constitutional legitimacy, an entity whose tasks (security, political, economic, cultural) all work for the same of protecting the Zionist entity in Palestine. They also work to secure the privileges of a particular Palestinian social sector, whose number does not exceed hundreds of individuals, yet whose interests have hijacked the PLO and its representation of the Palestinian cause. They enthusiastically have participated in the process of “economic peace,” together with the occupying entity.

The class of the Authority is a defeated capitalist class

With the announcement of the so-called “deal of the century,” this stage reaches its final conclusion. What is required today is popular action first, to hold those accountable who decided to deceive the people and take the path of neglect and manipulation. They adopted a policy of oppression, exclusion, exclusivity and domination of all of the institutions of the Palestinian people, making concessions in their name after these forces executed a public surrender before the world on the threshold of the White House on September 13, 1993.

Our people know the rest of the story best and how we arrived at this endpoint. The Palestinian people are also aware through their historical and present experience that the “Oslo entity” has become a sinkhole that traps them from all sides, and “Oslo” was the biggest deception of all. How, then, can the people break these shackles and loosen the hangman’s noose? This is the first essential step to confront the central enemy of the Palestinian people and accomplish their only goals: return and liberation.

With the announcement of the Trump “deal,” some are looking for a project to save themselves and their own interests while the Palestinian people are searching for a collective national salvation project for their homeland, their cause and their future. Tens of thousands of martyrs and around one million prisoners of struggle have been jailed in the enemy’s prisons since 1948. Our people have sacrificed everything that they have in order to remain and to preserve Palestine, the cause, the rights and the struggle. They have no choice but to continue the struggle, from generation until generation, until they achieve their full national goals and rights, their liberation. But they are once again bound by the shackles of the Oslo entity.

Since 1968, the Zionist enemy has attempted to create what it calls a local “Palestinian entity,” in cooperation with “senior personalities” of the West Bank, Gaza and East Jerusalem, from the representatives of big Palestinian capital, tribal leaders and traditional figures, on both banks of the Jordan river. These personalities and forces have relied, and continue to rely, on their close relationship with the Jordanian regime in particular. Many initiatives and liquidation projects have continued to produce and reproduce themselves under various and countless names. The “project of administrative autonomy” or the “self-rule government” were the first, but the essence and content have remained the same through many titles.

It can be said that these liquidation projects are a reactionary Zionist colonial “solution,” as an alternative to the revolutionary historical solution presented by the Palestinian revolution, with its escalation of guerilla struggle: The project of liberation, return and the establishment of a democratic society in all of Palestine. The proposed name for “limited administrative autonomy” has been changed through the context of numerous political initiatives delineating the nature of the relationship between the occupation entity and the Palestinians in the West Bank and Gaza according to a master-slave relationship. The goal is to legitimize the settler colonial occupation entity in all of Palestine, not only to prevent its withdrawal from the West Bank and Gaza.

The substance of these projects remained unchanged until they were translated on the ground by the signing of the Oslo agreement by the leadership of the Fateh movement and the subsequent creation of the Palestinian Authority (1994). The birth of the Authority was accompanied by a complete coup in the international and Arab frameworks and forums of the representation of the Palestinian people, and with the collapse or deliberate destruction of the PLO and its institutions as well. Thus, Palestinian capital found an opportunity to establish this meager and subordinate entity under the name of the “Palestinian Authority,” leaning on its political party, the vehicle that it would ride: the Fateh movement.

The Palestinian Authority then came as a poisoned fruit, an accumulation of previous destructive and capitulationist policies that began in 1974, but that is for another time.

A new stage of destruction and retreat began, and we are still living its catastrophic consequences to this day. The truth is that the danger of the existence of the Oslo entity (the so-called “Palestinian National Authority”) in the era of globalized neoliberalism, after the collapse of the socialist camp, amid the direct American military presence in the region and the ensuing wars, all lie in the fact that it has become a tool in the arsenal of liquidation of the Palestinian cause. That is, a tool for the liquidation of the national liberation project under a Palestinian cover. This is because “the castle is taken from the inside;” the enemy could not advance a single inch without the presence of the Palestinian tool, which was provided specifically by the Fateh leadership, for total liquidation.

The Palestinian popular anger against the Oslo entity is, in essence, anger against the occupation first. The Authority that exists today is a privileged creation, an Israeli-European-American Authority. Rebelling against it and bringing down its absurd and destructive path is the popular, practical and only necessary response to the liquidation project. This means the release of all of the political detainees in its prisons by all means, and it means restoring respect to the Palestinian National Charter and the unity of the people and the land of Palestine. This also means a new beginning for the establishment of the Palestinian popular leadership, a true authority that restores the essence of the Palestinian national cause and its goals: the return of the Palestinian people and the comprehensive, complete liberation of Palestine.

Confronting the “Deal of the Century”: A new culture of resistance for a new freedom fighter — Khaled Barakat