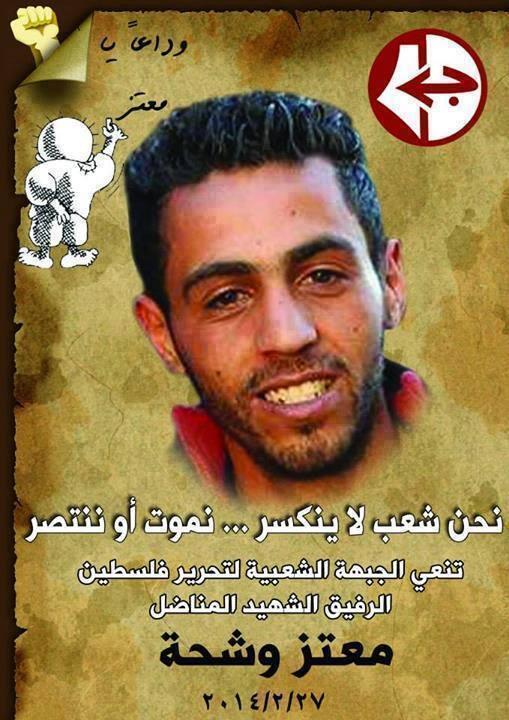 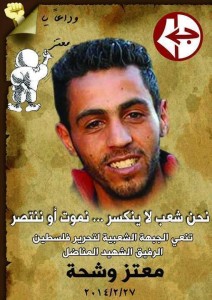 The General Secretary of the Popular Front for the Liberation of Palestine, Ahmad Sa’adat, issued a statement in his name and that of the PFLP’s Deputy General Secretary Abu Ahmad Fouad, and the Front’s members, saluting Moataz Washahe, 25, the young PFLP member who was killed in his home and his home  demolished around him by Israeli occupation forces in Bir Zeit as he refused to turn himself in to the attacking forces on February 27.

In a statement from prison, Sa’adat said that “This is not the first nor the last time that the steadfast town of Bir Zeit and the Washaha family of the martyr have faced with all steadfastness the occupation’s special forces and their heavy weaponry of death, and struggle until their last breath, until death. The martyr Moataz was raised from an early age to love the homeland, love the resistance and fight the occupation. For that he was arrested more than once and was labeled a fugitive and wanted, and even when cornered by treacherous, cowardly Zionist forces, he chose the path of confrontation and refused to surrender, martyred in an unequal battle, but providing an example that leads to victory over the Zionist enemy.”

Sa’adat pledged that the Front would remain faithful to the cause and the sacrifice of the martyr Moataz, who so loved Palestine, to achieve the goals of our people for freedom, return and liberation and the removal of the Zionist entity from our occupied land. His blood, and the blood of all martyrs, will not have been shed in vain, and he will remain inscribed in our memory and that of the generations to come.