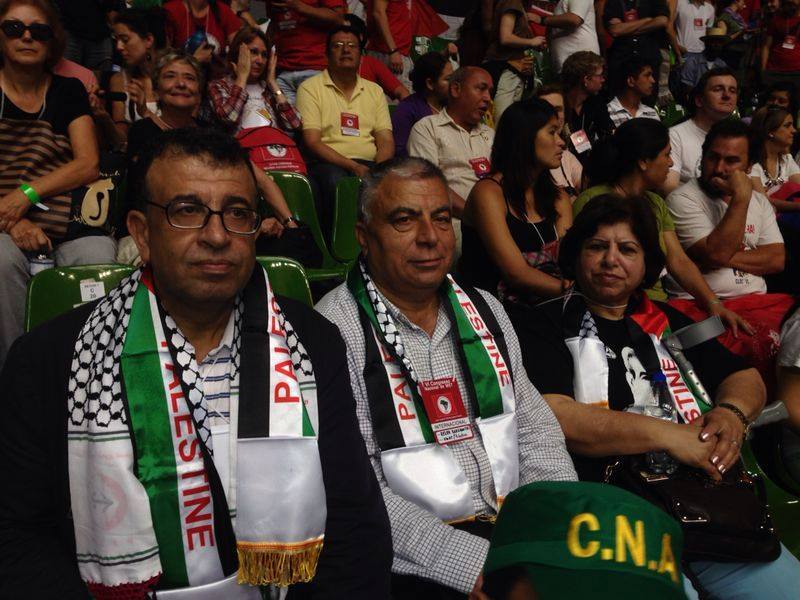 The following statement of solidarity from Ahmad Sa’adat, imprisoned Palestinian national leader and General Secretary of the Popular Front for the Liberation of Palestine, was delivered to the 30th anniversary congress of the Landless Workers Movement (Movimento dos Trabalhadores Rurais Sem Terra (MST)) of Brazil on  February 11:

The MST Congress is currently being attended by Abla Sa’adat, Palestinian women’s organizer and prisoner solidarity activist as well as the wife of Ahmad Sa’adat; Marwan Abdel-Al of the Popular Front for the Liberation of Palestine; and representatives of the Union of Agricultural Work Committees from Palestine:

I salute you and convey to you the greetings of the comrades in the Popular Front for the Liberation of Palestine, and I look forward to the great success of your conference that will strengthen your march along the road, and build your role and presence, in the deepening of democratic and socialist transformation in your beloved country and throughout your continent. You carry the legacy of a rich history of revolutionary experience, sanctified with the blood and suffering of great leaders: Bolivar, Zapata, Salvador Allende, Fidel Castro, and the list goes on.

The systematic imperialist war on the oppressed peoples and classes continues, while at the same time forces of democracy and socialism continue to achieve many concrete accomplishments in your continent. It is clear that Latin America will never again be the “back yard” for U.S. imperialism, and your rich experience is a foundation for an international revolutionary alliance that works to manifest a concrete revolutionary vision, and which pushes to strengthen the unity of all forces of the camp of world revolution, on the road to defeat imperialism and build a new revolutionary world that establishes relationships between peoples on the basis of peace, equality, parity and equitable distribution.

Perhaps one of the repercussions of your achievements has been felt in the Arab region, where the people of our nation struggle to achieve revolutionary democratic change and break the shackles of political, economic and cultural imperialism. Despite attempts to re-shuffle the cards and block the path of popular democratic movements, and despite their success in Libya and partially in Syria in entering their people into the labyrinth of sectarian and civil war; the masses of the people in Tunisia and Egypt refuse to be pushed aside. In Tunisia, the alliance of democratic and left-wing forces pushed the troika government led by the Ennahda Movement to recognize their demands, including the adoption of the draft constitution and preparing for general elections amid many positive indicators that indicate that coalition of left and democratic forces may achieve advanced results in these elections in order to safeguard the achievements of the revolution.

In Egypt, young people who were from the beginning the main force of the revolution, toppled the government of the Muslim Brotherhood after their attempts to impose their agenda and dominate the process of change. However, we do not express our support for the actions of the army or the military resolution of the conflict, and there are many negative factors that have arisen, in particular the pivoting between right-wing forces: the army and the remnants of the old regime and the abuses of the right-wing Muslim Brotherhood and other forces. We hope that Egypt will emerge from this period and toward a transition and transfer of power to a democratic government elected by the people.

In Palestine, the aggression continues, which combines traditional forms of colonial violence and the apartheid-style practice of the white minority regime in South Africa before its liberation, and which deeply affects the masses of our people wherever they are located, whether through the seizure of land and the expulsion of its rightful owners or the division of the occupied territories into isolated areas. At the same time, the violence of occupation attempts to destroy all of our initiatives to build Palestinian national unity, while the parasitic bourgeoisie bet on the path of negotiations that they have tried for over two decades, producing nothing but the current crisis experienced by our people. In order to confront this reality, our front is struggling to emerge from Palestinian internal division, restore unity, and build the institutions and mechanisms of our people – in particular, to rebuild the militant structures of the PLO and the unity of our people inside and outside Palestine. Furthermore, we are struggling to build a national democratic front to accommodate a broad spectrum of political and social forces under a national program of struggle that adheres to resistance in all of its forms.

The enemy’s violence ensures that we must confirm our commitment to the resistance option as it closes all doors to lead to a political solution of the conflict. Our vision and strategy, as the Popular Front, to resolve the conflict in Palestine, is the dismantling of the Zionist racist colonial project and building a democratic state, one state on the entire land of Palestine, governed by a democratic system that rejects all forms of discrimination on the basis of color, race, nationality or religion and builds relationships among the inhabitants of Palestine, Arabs and Jews, on the basis of citizenship and equality in rights and responsibilities.

However, we also work with the rest of the national and Islamic forces on the basis of the common program of the rights of our people to return, self-determination, and to establish their independent state with Jerusalem as its capital on all territories occupied in 1967 and see this as an event, which if achieved, could lead in the direction of the completion of the democratic solution through a comprehensive struggle to establish one democratic state.

In the past months, our Front completed its Seventh Conference and confirmed its decisions on the need to consolidate national unity and to build our struggle on the class, Palestinian, Arab and international fronts. The Front also elected its leadership, with a rate of renewal exceeding 70% at all levels of leadership, which requires us to advance and respond to the tasks before us and before our people.

Exacerbated by the general crisis of capitalism, and the tangible achievements of the forces of world revolution which we see clearly  in your continent,  these achievements present a new model of distinctive democratic and socialist transformation. This should prompt all international revolutionary forces to promote unity and reformulation of our theories of international revolution and building mechanisms of internationalist leadership.  I am confident that we will achieve a transformation from capitalism to socialism through the new-democratic revolution and political transition phase, and I am confident that this victory will be one for all oppressed classes and peoples. If the dawn of the new world does not come today, then it will come tomorrow. Congratulations to your conference and we stand hand in hand with you, fists raised to the highest level to hit every imperial castle.

Secretary-General of the Popular Front for the Liberation of Palestine