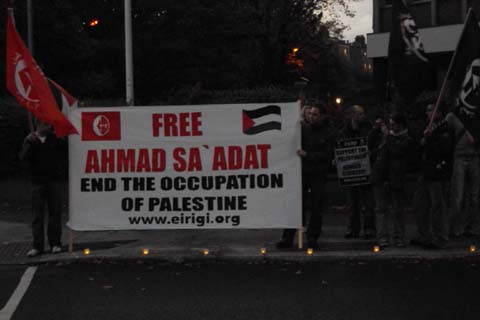 On Wednesday evening [October 5] éirígí held a successful candlelight vigil in support of Palestinian prisoners who have embarked on a hunger strike in protest against the way in which they are being detained and treated. 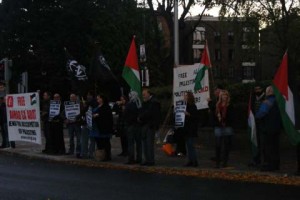 Around 50 activists gathered outside the Israeli Embassy on Pembroke Road to express both their solidarity with the protesting prisoners and their revulsion at the treatment they are being subjected to. The hunger-strike was initiated by prisoners from the Popular Front for the Liberation of Palestine [PFLP] on Tuesday 27th September but has now been joined by prisoners aligned to other Palestinian groups. Details are sketchy but it appears that the protest has spread right across the Israeli prison system and now involves hundreds of prisoners. The prisoners are protesting principally against the extent of the isolation and solitary confinement to which they are subjected.

According to the Israeli Human Rights Group B’Tselem, Palestinian prisoners are routinely subjected to far more widespread mistreatment that involves “sleep deprivation, tying a detainee to a chair in painful positions, beating, slapping, kicking, threats, verbal abuse and humiliation, bending the body in extremely painful positions, intentional tightening of handcuffs, stepping on worn manacles, application of pressure to different parts of the body, forcing the detainee to squat in a painful position, choking and other forms of violence and humiliation (e.g. spitting and pulling hair, solitary confinement, exposure to extreme heat and cold, continuous exposure to artificial light, and confinement in inhuman conditions.” The truth is that what this ‘treatment’ amounts to is in fact systematic torture. 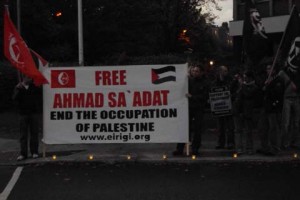 Speaking at the protest, éirígí spokesperson Daithí Mac an Mháistir took the opportunity to express the party’s solidarity with the protesting prisoners and the PFLP. He noted the gravity of the situation and appealed for progressives to do all they can to bring attention to the plight of the prisoners.

Mac an Mháistir referred to the “long and painful history of hunger-striking in Ireland” and stated his “fervent wish that no Palestinian prisoners would have to die in the face of Israeli government intransigence just as happened in Ireland in 1981 when 10 men died on hunger-strike.”

He concluded by reiterating éirígí’s support for the “ending of the occupation of Palestine, which is the primary reason why an estimated 7,000 plus Palestinian men and women are in Israeli jails in the first place.