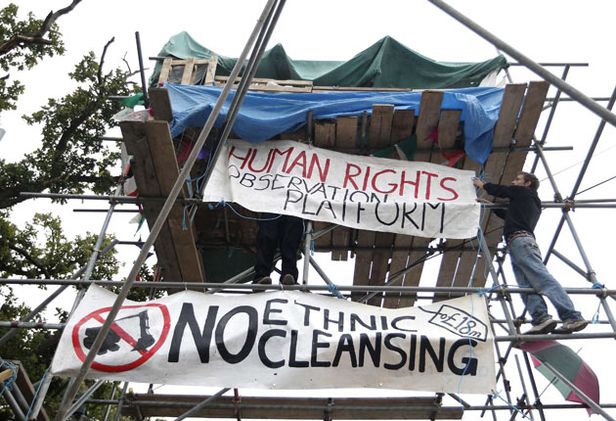 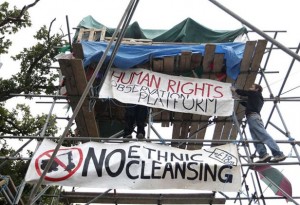 We are a group of people supporting Dale Farm Traveller community in Essex, UK to resist a forced eviction by Basildon Borough Council.
We are fasting in solidarity with your hunger strike from sunrise to sunset today 7th October 2011.
The Dale Farm community has owned this former scrapyard for ten years and now faces a racist forced eviction dressed up as protecting the landscape. Many of the people in the community are children or elderly, and their rights to education and health care are being denied by this eviction as well as their right to live on their land.
Travellers, Gypsies and Roma in the UK have been systematically oppressed in this country for generations. Their way of life has been criminalised as they are no longer able to park their caravans along the roadsides, and traditional parking places have been lost to development all over the country. They have been forced into settled ‘sites’ but they are denied legal right to stay because of biased planning regulations. Most Travellers have lived through numerous forced evictions.
Many of the supporters here to resist the eviction have been actively involved in the struggle to free Palestine and we see the links between racist States seeking to ethnically cleanse an area of people whose way of life they do not understand. Like the Palestinians, Travellers in the UK live in fear.
We wish you strength in your struggle against the repression and humiliation of political prisoners in Israeli Prisons and against Israel’s continued occupation of your land.
Dale Farm Solidarity