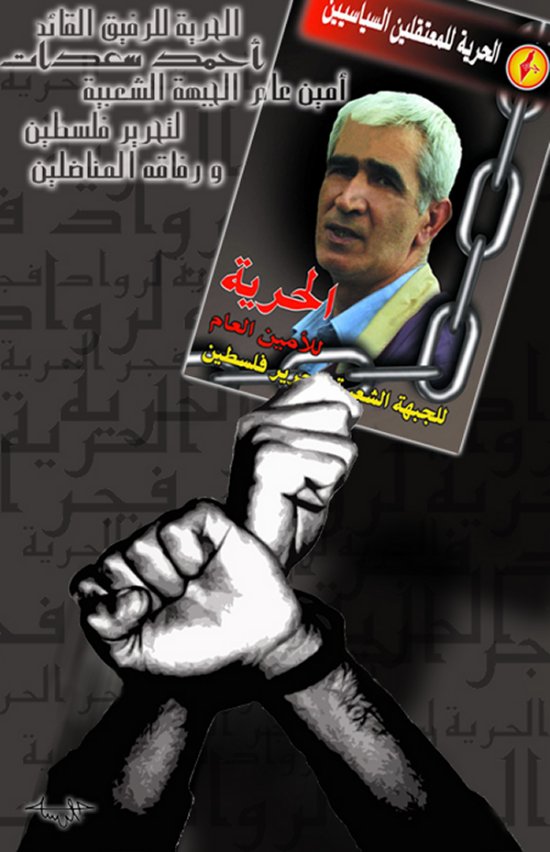 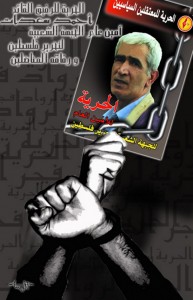 The Israeli occupation courts have, once again, extended the isolation of Ahmad Sa’adat. On May 3, 2011, at a hearing in Beersheba prison, the court issued an extended isolation order until November 3, 2011. Ahmad Sa’adat, General Secretary of the Popular Front for the Liberation of Palestine and Palestinian national leader, has been held in isolation since March 19, 2009 – for over two full years, over 775 days.

It is well-established that solitary confinement and isolation are dangerous and detrimental to the physical and mental health of prisoners. It is a technique frequently used against political prisoners, from the U.S.’s Guantanamo Bay and Communications Management Units, to Ben Ali’s isolation cells in Tunisia, to the prisons of the occupation. Israel is a signatory to the International Covenant on Civil and Political Rights, whose articles 10 states that “All persons deprived of their liberty shall be treated with humanity and with respect for the inherent dignity of the human person.” On the contrary, isolation cells deprive prisoners of human contact, recreation, and mental stimulation. Sa’adat is regularly denied family visits, newspapers, books, and information in Arabic. While Israel’s utter contempt for international law is visible in every aspect of its behaviour, from its war crimes against Palestinians, to its denial of the Palestinian right to return, to its apartheid regime targeting Palestinian citizens, the situation of Palestinian prisoners is a glaring example of Israel’s flouting of international law and human rights standards.

The European Committee for the Prevention of Torture and Inhuman or Degrading Treatment or Punishment (CPT) – the expert body associated with the Council of Europe – has noted, “It is generally acknowledged that all forms of solitary confinement without appropriate mental and physical stimulation are likely, in the long-term, to have damaging effects resulting in deterioration of mental faculties and social abilities.” Those prisoners targeted for isolation, including Ahmad Sa’adat, are long-time Palestinian leaders. Sa’adat has always been a leader among his fellow prisoners and a voice of conscience of the Palestinian people – and it is for that reason that he is being targeted under cover of secret evidence for isolation and deprivation.

Sa’adat refused to attend the hearing, as an illegal manifestation of an illegitimate occupation and abduction, and due to its reliance on secret evidence, saying that he refused to legitimize what was clearly a mockery of justice.

From administrative detention, to military trials, to the isolation cells, Israel shows utter contempt for the human rights and dignity of Palestinian prisoners. In response, it is urgent that supporters of Palestine and justice around the world raise their voices to demand an end to isolation, an end to arbitrary detention – and the freedom of Ahmad Sa’adat and every one of the thousands of Palestinian prisoners of freedom, in an occupation’s jails for daring to struggle for the freedom of their land and people.

Please contact us at campaign@freeahmadsaadat.org to inform us of your events and actions.

1. Call the Israeli embassy or consulate in your location and demand the immediate freedom of Ahmad Sa’adat and all Palestinian political prisoners.

2. Write to the International Committee of the Red Cross and other human rights organizations to exercise their responsibilities and act swiftly to demand that the Israelis ensure that Ahmad Sa’adat and all Palestinian prisoners are freed from punitive isolation. Email the ICRC, whose humanitarian mission includes monitoring the conditions of prisoners, atjerusalem.jer@icrc.org, and inform them about the urgent situation of Ahmad Sa’adat.

3. Email the Campaign to Free Ahmad Sa’adat at campaign@freeahmadsaadat.org with announcements, reports and information about your local events, activities and flyer distributions.