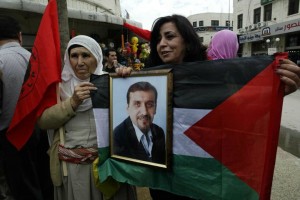 May 28, 2011 – Ahmad Sa’adat, imprisoned Palestinian leader, member of the Palestinian Legislative Council and General Secretary of the Popular Front for the Liberation of Palestine, issued a statement from his isolation cell in Nafha prison on May 24, 2011. Sa’adat’s letter marked the anniversary of the Nakba and sent condolences to the entire Palestinian people, and particularly the Palestinian community in exile and diaspora, for the “martyrs of Return” who gave their lives in Jerusalem, the occupied Syrian Golan, Lebanon and Gaza on May 15, 2011, when they were killed by Israeli occupation forces as they protested in mass actions commemorating the 63rd anniversary of the Nakba and demanding the implementation of Palestinian refugees’ right of return.

Sa’adat presented his statement to attorney Buthaina Duqmaq, President of the Mandela Foundation for Prisoners and Detainees, who visited him at Nafha. In his comments, he urged the entire Palestinian people to struggle to establish unity in order to move forward in the collective Palestinian national struggle to achieve common goals – return, liberation and self-determination.

Ahmad Sa’adat has been held in Israeli occupation prisons since March 14, 2006, when he was abducted by force from the Palestinian Authority prison in Jericho, where he had been held for four years under U.S. and British guard, charged with no crime. He has been held in isolation since March 2009. 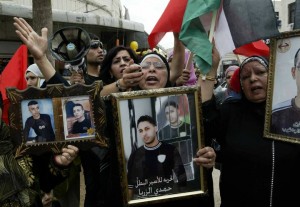 Sa’adat spoke to the May 15 marches for return, saying that “the popular energy of May 15 can lead our nation in a new direction, through national unity and rebuilding the Palestinian house – particularly the PLO and its political and social unions that are the common property of our entire people, everywhere they are – and by the Palestinian leadership rising to the level set by our people, to struggle and break free of reliance or betting on the United States or other forms of authority.”

He emphasized the need to end the “negotiations” and so-called “peace process” and to prioritize instead the aspirations and goals of the Palestinian people, saying that the negotiations stem from a clear imbalance of power that is heavily weighted in favor of the interests of the occupation and its allies, the imperialist countries. He said that the Palestinian people could benefit greatly from the new Arab spring that has enlivened the energies and imagination of the Arab nation, which presents a better future for the Arab nation and Arab people, leaving aside dependence and servility and recovering Arab sovereignty, freedom, independence and unity and paving the way for democratic development and collective economic and social prosperity.

Buthaina Duqmaq reported that Sa’adat had high morale despite the conditions of isolation; she noted that he had been deprived of all rights, including family visits and communication with fellow prisoners, yet showed a high level of optimism in light of the news of change and revolution in the Arab world and its potential to support the Palestinian people and their struggle.

Sa’adat commented that “Current circumstances are reshaping our region, and we believe it will be in a direction that serves our cause and our people. These circumstances also lead us to raise our level of confrontation with the occupier and its aggression and rejection of our rights – a commonality shared by all Zionist parties at all levels.”

Sa’adat said that he has great faith in the ability of the Palestinian people to lead where the leadership has failed, saying that these “failed leaders must step aside and recognize that the way forward is the movement of the people,” calling for “action and struggle without restrictions or barriers by any authority, to confront the occupation, on a program of popular resistance and mass mobilization that responds to the diverse interests of our people at every moment and at every time in our cause.”

He also spoke about his own isolation, saying that it is part of an attempt to break the morale and steadfastness of Palestinian prisoners, and that his isolation is a tactic of revenge and has nothing to do with “security reasons.” He described the isolation of prisoners from their fellow prisoners and their environment as an attempt at “slow execution,” killing prisoners “socially if not biologically,” noting that this was the motivation of the Israeli prison administration. 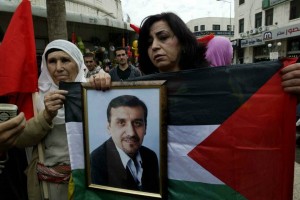 Despite this, Sa’adat said, “We continue to live. We know the reasons for their actions, and our very presence – even in their prisons – continues to defy and confront occupation. We will not allow the occupiers to achieve their goals. This is a battle of wills, and it is part of the great battle of wills in which our people are engaged, to obtain national and historical rights and defeat the ccupation. As will our people, we will win this battle by our stronger will, but also because the movement of history and society is in favor of justice and liberation, despite the occupier’s force of arms.” Sa’adat concluded by saying he is satisfied that the occupier cannot kill the Palestinian movement, either in prisons or outside, in Palestine or in exile. “They will reap the failure of all their efforts; they do not weaken us,” he said, “but they will only give us greater strength.”

Protests will be held May 28, 2011 in Ramallah and Gaza, calling for the release of all Palestinian prisoners and, in particular, the freedom of Ahmad Sa’adat. Photos from May 28 protests.