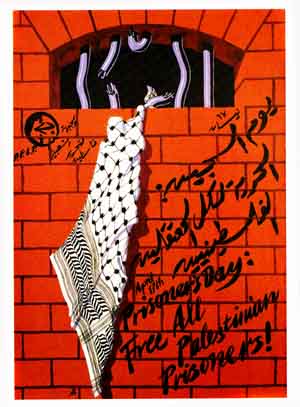 On Palestinian Prisoners’ Day, April 17, 2011, the Campaign to Free Ahmad Sa’adat salutes all of the over 5,700 Palestinian prisoners inside the Israeli occupation’s jails, and calls upon all those concerned for justice and freedom to join and build the largest possible international movement to secure the freedom of all Palestinian prisoners, and of the entire Palestinian people.

Palestinian prisoners have always stood as the backbone of the Palestinian national movement. Their continued steadfastness in the face of torture, isolation, denial of medical care and family visits, and their continual willingness to confront the occupation, engaging in hunger strikes and protests and demanding their rights, is an inspiration to all.

We also note today the Palestinian and Arab political prisoners held in jails around the world, many for their own support of the Palestinian struggle and the Palestinian cause, and call for the freedom of all of those prisoners, and of all political prisoners in the jails of their oppressors around the world. We demand that governments end their investigations of and repression against activists supporting Palestine – from the U.S., where 23 activists face grand jury subpoenas and FBI raids for their public activity in support of Palestine, to France, where boycott, divestment and sanctions activists have been threatened with charges for boycotting Israeli goods, to Argentina, where an activist was arrested for organizing a Nakba commemoration – to everywhere around the world. Instead of attempting to suppress and silence voices of justice and solidarity, these governments must act to end their complicity and support for Israeli war crimes and occupation against the Palestinian people.

On Palestinian Prisoners’ Day, we urge the new Egypt to mark this day by releasing all remaining Palestinian prisoners in Egyptian jails. We greet the Arab popular movements with solidarity and call for the freedom of all Arab political prisoners in Arab jails.

Furthermore, we also spotlight today the village of Awarta, which has been subject to closure, home invasions, mass kidnappings, detentions, forced DNA testing of hundreds of women, lengthy imprisonment of children, and interrogation of thousands of Palestinians. Awarta is under siege, and we stand today with the people of Awarta subject to massive and arbitrary detention and call for international attention and solidarity with the people of Awarta.

We also stand with the people of Gaza struggling to break their own siege, and note that Palestinian prisoners in Israeli jails from Gaza have been denied family visits for years. We demand an end to the siege of Gaza and the siege of its prisoners!

For two years, Ahmad Sa’adat, the General Secretary of the Popular Front for the Liberation of Palestine, has been held in isolation in the occupation prisons. He has been regularly regularly denied family visits, denied access to books or reading mateial, and denied basic exercise and medical care. Sa’adat was kidnapped by the Israeli occupation army on March 14, 2006 from where he and his comrades, Ahed Abu Ghoulmeh, Majdi Rimawi, Basil al-Asmar, and Hamdi Qur’an, were imprisoned in the Palestinian Authority’s Jericho Prison under U.S. and British guards. The U.S. and British guards removed themselves immediately prior to the Israeli attack, making clear that the U.S. and the U.K. were directly complicit in the attack on Jericho. Sa’adat, the leader of a major Palestinian political party and an elected member of the Palestinian Legislative Council, had been held in Israeli prisons for nearly six years at various times, held repeatedly in “administrative detention,” where Palestinians are held without charge or trial under secret evidence. He was held in PA prisons for four years before his kidnapping and has now been held in the occupation’s prisons for five years.