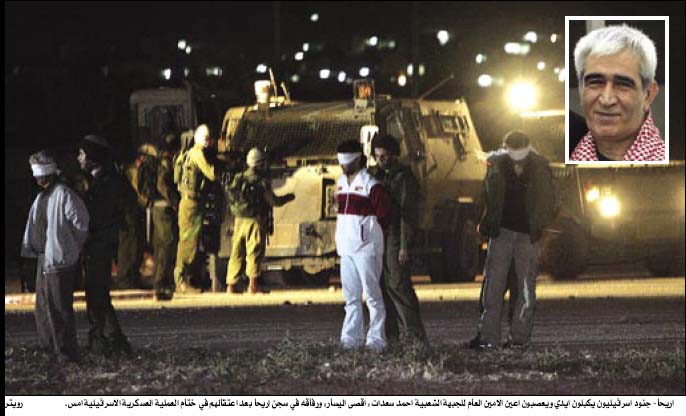 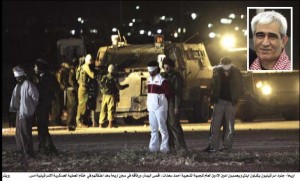 March 15, 2011 marks the fifth anniversary of the storming of Jericho prison and the abduction of Palestinian national leader Ahmad Sa’adat and his comrades by the Israeli occupation military. On this anniversary, the Campaign to Free Ahmad Sa’adat emphasizes that the strength and determination of the Palestinian people to free all prisoners from the occupation jails has remained steadfast and strong, and calls upon all to support and join in the March 15 protests for Palestinian unity and against the Oslo agreement. Despite the abuse and isolation they have suffered, the Palestinian prisoners and the Palestinian people will continue to resist occupation, racism, and settlement in order to obtain their rights to freedom, self-determination and return.

Since his abduction, Ahmad Sa’adat has been subjected to repeated mistreatment, denial of family visits and denial of medical care in occupation prisons. He has been held in isolation since March 19, 2009, with his isolation repeatedly renewed. Despite the occupation prisons’ practices, which run contrary to international norms and human rights standards, Sa’adat has continued to stand firm and steadfast with the Palestinian people and their rights, and while the jailers have isolated Sa’adat physically, they have failed to isolate his words or his spirit – the Palestinian people and the world stand with him.

The anniversary this year of Ahmad Sa’adat’s abduction comes in conjunction with the March 15, 2011 protests to end Palestinian internal division and overthrow the Oslo agreement and all of its products. Sa’adat’s abduction, coming as it did from a Palestinian Authority prison established under the terms of Oslo and its “security cooperation”, was itself a manifestation of Oslo and the fracturing of the Palestinian internal front.

On this anniversary, the Campaign to Free Ahmad Sa’adat echoes Sa’adat’s call for support for the March 15 demonstrations. Sa’adat’s wife, Abla, reported on March 11 that he called for all Palestinians, inside and outside Palestine, to participate in the protests and expressed his “sincere greetings for all of the efforts led by Palestinian youth, and affirmed that all prisoners in the jails of the occupier are with them, support their movement and their demands.”

The Campaign to Free Ahmad Sa’adat calls upon all of its supporters around the world to join in and support Palestinian efforts for March 15 demonstrations in all area, including actions and demonstrations called by local Palestinian communities, and to raise the struggle of Palestinian prisoners, one of the central demands of the March 15 protests. We join with Ahmad Sa’adat and share his conviction in the ability of the Palestinian people to take the initiative in their hands and pressure for change, to end the division, and end the destructive era of the Oslo agreements and “negotiations.”

On this anniversary, we reiterate our call to all organizations in solidarity with Palestine, prisoners’ rights and human rights to join the Campaign, and for international authorities, including the United Nations and the International Committee of the Red Cross, to take up their responsibility to address the ongoing suffering and abuse of Palestinian political prisoners by occupation forces, including the abuse of child prisoners and the denial of medical care to ill prisoners.