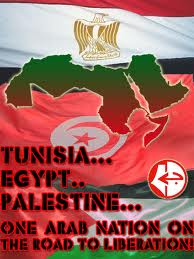 The Campaign in solidarity with Ahmad Sa’adat condemned the Palestinian Authority security forces in Ramallah on February 3, 2011 for blocking a demonstration in solidarity with the revolution in Egypt as well as preventing committees and activists from organizing demonstrations and marches in support of Tunisia and Egypt, including the arrest of some activists and organizers.

The Campaign said that it is shamefulthat the Zionist entity allows a pro-Egyptian demonstration in front of the Egyptian embassy in Tel Aviv while the masses of our people in Ramallah are suppressed and denied their natural right to express their noble feelings and human solidarity with their brothers, the Egyptian people, and their popular longing for their normal and legitimate rights – a people who gave thousands of martyrs to liberate Palestine.

The Campaign said that the PA in Ramallah will not succeed in suppressing the Palestinian people’s support for Egypt’s Arab people, the freedom of their nation, and their right to freedom, sovereignty, democracy and justice. It is the right of the Palestinian people to express solidarity and stand alongside the victorious Tunisian revolution and the Egyptian people’s uprising, and it is incumbent upon the Authority in Ramallah and Gaza to respect the people’s rights to democracy, freedom of association, assembly and expression.