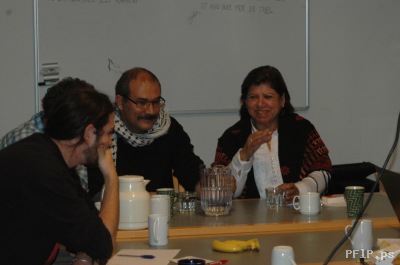 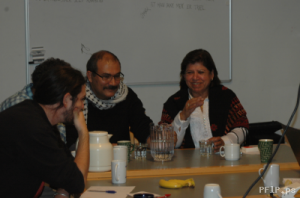 Abla Sa’adat, the wife of imprisoned Palestinian national leader Ahmad Sa’adat and Palestinian women’s organizer, recently conducted a tour of the United States in October-November 2010, meeting with members of the Palestinian community in various cities, discussing the situation of Palestinian women and Palestinian prisoners. She brought greetings from her husband, Ahmad Sa’adat, the imprisoned General Secretary of the Popular Front for the Liberation of Palestine, addressed to the Palestinian and Arab community in North America, as well as the solidarity movement with Palestine. Sa’adat’s message emphasized the need to build national unity on the basis of democracy and to struggle to advance Palestinian rights in Palestine and in exile, and to protect Palestinian constants, particularly the right of return.

n Houston, Texas, she participated in a series of cultural, social and political events and meetings, discussing the role of the Palestinian movement in the U.S. and the role of institutions that can serve the Palestinian people. The meetings there agreed to establish a committee of Friends of Palestinian Prisoners in Houston.

Abla Sa’adat also visited Youngstown, Ohio; San Francisco; and Los Angeles during her tour of the U.S. She delivered a number of presentations on the role of Palestinian prisoners, as well as meeting with women’s groups to discuss building the Palestinian women’s movement as well as international links with women’s organizations.