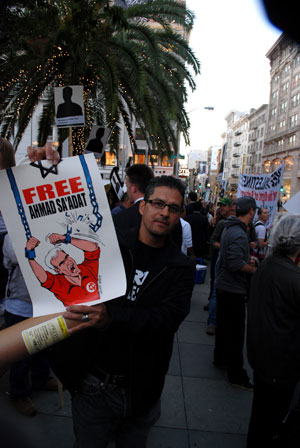 Protesters in San Francisco, California, United States rallying against Israeli war criminal and former Prime Minister Ehud Olmert on October 22, 2009 raised posters calling for freedom for Ahmad Sa’adat and all Palestinian prisoners on the international day of action against his isolation and imprisonment.

Olmert recently visited the United States on a speaking tour, where he was met with strong protests everywhere he spoke – Kentucky, New Orleans, Chicago, San Francisco, and Arkansas. In Chicago and San Francisco, his speeches were interrupted by a number of protesters who shouted Olmert’s crimes and the names of his Palestinian victims to the audience. In San Francisco, Olmert’s speech at the World Affairs Council coincided with the international day of action to free Ahmad Sa’adat, where over 250 protesters gathered outside the hall and 22 interrupted his talk inside, calling out his crimes against Palestinians and Lebanese.

Twenty-two activists were arrested at the event and released. Inside the auditorium, activists began disrupting the event by placing Olmert under citizens arrest. Every couple of minutes, more activists disrupted his speech, barely allowing him to speak, by reading the names of the children killed in Gaza last winter, reading from the recently published Goldstone Report, and displaying banners that read “Lift the Siege on Gaza” and “War Crimes are Not Free Expression!” Activists were removed from the auditorium chanting “War Criminal!” and taken to the Tenderloin Police Station where they were held for citation, then released. Ten additional people participated in the action but were not arrested. 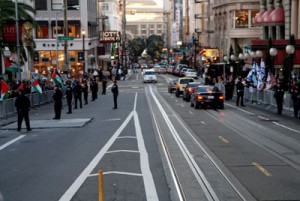 “We join with people around the world who believe that Israel and its leaders must be held accountable for their actions. Israel killed 1400 people during its attacks on Gaza last winter alone, and many more have died or suffered from the effects of siege, occupation, and apartheid on their daily lives,” said Monadel Herzallah, member of the National Coordinating Committee of the US Palestinian Community Network, whose 21 year old cousin was killed in Gaza in January.