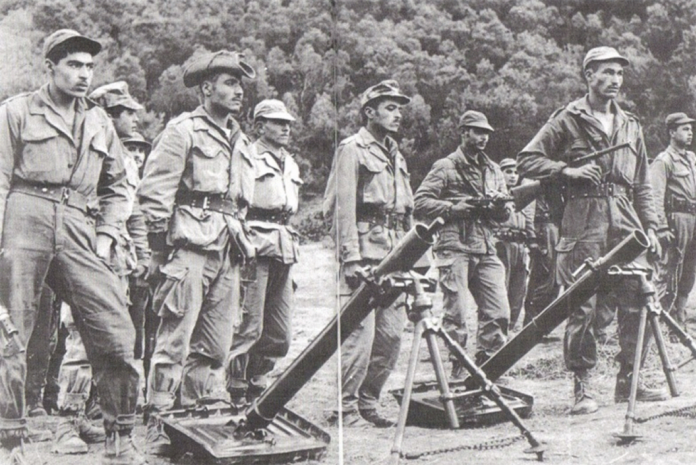 The following article, by Khaled Barakat, Palestinian writer and the coordinator of the Campaign to Free Ahmad Sa’adat, is translated and reprinted from the Arabic original at Quds News:

The Algerian people had repeatedly tried to seek a peaceful method of “understanding” with the French colonialists. They tried it repeatedly, and found no way to achieve peace despite appeals, petitions, statements, complaints and conferences. Each time, France’s response was the same: a new massacre, a campaign of arrets and more – the natural fruit of colonization and colonial, racist laws. The French colonialist raised his finger and threatened, shouting his only slogan: Algeria is French and will remain French forever!

On 8 May 1945, France committed a heinous crime that profoundly affected the hearts and minds of the Algerian people. All of this took place in several days. Many of the massacred were stuffed into caves, wells and ravines, turning them into stone ovens housing mass graves.

The documents say that France killed around 45,000 Algerians because they took to the streets in public rallies and celebrations at the end of World War II, demanding that France keep its promises and grant Algeria its independence.

Algerian estimates say that 50,000 to 55,000 martyrs were killed in the 8 May massacres and perhaps more. This terrible massacre came alongside the French deception and the breaking of its promises, and together with countless factors and causes, led to the birth of a new path for the people. This prompted the young revolutionary Algerian vanguard to accelerate their path, take up arms and establish the first armed revolutionary cells in Algeria under an elected leadership of six people.

Underground work continued in preparation, military training, gathering of arms, money and materiel. On 1 November 1954, the FLN declared in its first statement the launch of the Algerian armed revolution to liberate Algeria from colonialism and gain independence.

It was not a long and fiery statement like those of the Palestinian and Arab parties today. It was a very short statement with three main demands that were fair, clear and understandable. All of the people picked them up and carried them with them, and the poem of Mufdi Zakaria, which later became the Algerian national anthem, was born in that historic statement. “France has passed the time of warning – get ready to receive our answer.” On that day, the revolutionary forces launched a series of widespread, effective and successful operations throughout Algeria.

At the time, the number of French troops was estimated at 30,000, along with thousands of polcie and settler paramilitary battalions, while the number of Algerian mujahideen and guerilla cells was around 3,000. By the time the French left after 7 years of bloody conflict, the French armies had reached around 2.5 million soldiers. The number of the revolutionary fighters had reached between 25,000 and 30,000.

The local agents most dangerous to the revolution and the people were called “Harakis.” They cooperated with the French colonialists and the death squads (the “black palm”). Until this day, none of the successive French governments have cared about them, and there is a campaign today from their children and their grandchildren who are seeking a pardon and permission to return to Algeria.

The Algerian revolution launched on 1 November 1954 was, of course, not the only resistance launched in Algeria against French colonialism. Algerian history is full of struggle and there were many popular revolutions and armed uprisings tat exploded, faded and then exploded again.

The resistance of Prince Abdelkader of Algeria, which lasted from 1832 to 1847 in the north of Algeria

The resistance of Ahmed Bey, from 1837 to 1848 that included the area of Constantine

The revolution of Mohammed bin Abdullah, known as Boumaza, from 1845 to 1847 in Chlef, Hodna and Tetari

The resistance of Zaatasha from 1848 to 1849 with Zaatasha (Biskra) and Awras. One of its most important leaders was Bouziane Bou Ammar.

The tribal revolt from 1851 to 1857 led by the organization of Fatima N’Soumer and Sharif Boughalleh, which started from the Azoura region

The revolt of the people of Sidi Cheikh from 1864 to 1880 in Al-Baid, Jabal Ammour, Al-Tetri, Sur el-Ghozlane, Azoura and Tiaret, led by Suleiman Ben Hamza and Ahmed Ben Hamza.

The revolt of 1871 in Jijel and the north of Constantine.

The resistance of the Touaregs from 1916 to 1919 in Taghit, Hoggar, Jant, Mizab and Ouargla, led by Sheikh Amoud

Yes, it was not the first Algerian revolution against colonialism, but it was the revolution that won, achieved national independence and defeated a foreign occupation of the country, with the racist colonial nature of a colonialist project that lasted for 132 years.

This time, the revolution achieved victory for many reasons, foremost of which were the unity of the Algerian people, the justice of the cause and the clarity and inclusiveness of the political vision of the leadersghip of the revolution. Increased awareness, higher rates of education, knowledge of the language and culture of the enemy and the benefit of the after-effects of World War II, also played a role. These included the decline of France’s international role and the rise of Arab popular support, especially from the peoples of neighboring countries, from Egypt amid the rise of Nasserism, as well as the state of international solidarity with the revolution within France and throughout the African continent. These factors had a great impact on the victory. Most importantly, always, remained the blood of the martyrs and the will of the Algerian fighters and people, and their enormous sacrifices for their freedom and dignity, to liberate their homeland from colonialism and seize their right to national independence on 3 July 1962.

The relationship between Algeria and Palestine is a special and profound historical bond that brings together the two peoples and two experiences. It has an important and symbolic character that goes beyond the traditional and repetitive talk about the “brotherly relationship” and being “one nation.” Palestine is an Algerian national cause. It is an integral part of the Algerian popular, collective consciousness and character, and this is why the victory of the Algerian revolution had a direct impact on the cause of the Palestinian people. Palestinian youth, especially the advanced organizers, found an example, a model and a popular incubator in liberated Algeria. From there, they began training, arming and establishing the first guerilla bases for launching the revolution for the liberation of Palestine.

The big, painful question that must be asked today by both peoples on the anniversary of the Algerian revolution, and within the Algerian-Palestinian relationship, is: Where have the Algerian and Palestinian revolutions reached? Did the Algerian revolution achieve its major goals completely, and vanquish the forces of colonialism and exploitation? Or is there a great feeling that the revolution and the state have been hijacked by a sector that is entirely dependent on foreign money and power? This is exactly what leads the Algerian and Palestinian masses to today, chant together: Traitors- they sold us! The long, arduous path of social and national liberation is necessary to renew the popular revolution, albeit in different forms in both places, in order to reach the shores of victory and the full and complete liberation of the land and the people.