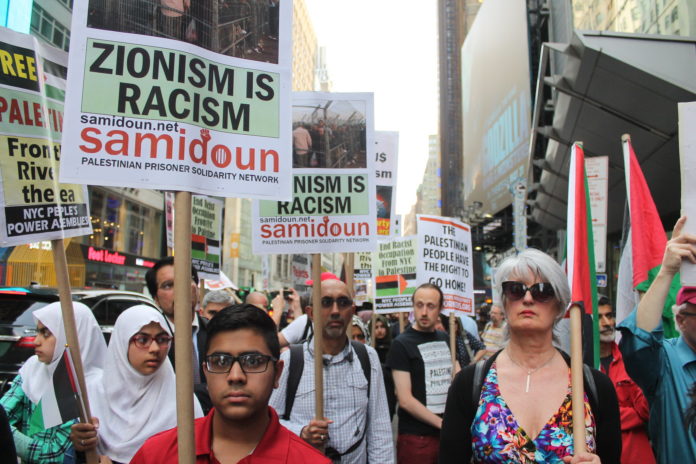 New Yorkers took to the streets on Friday, 31 May as part of the international Al-Quds Day events calling for justice in Palestine. Over 100 people joined the Times Square protest on the last Friday of Ramadan, including activists from Samidoun Palestinian Prisoner Solidarity Network, Within Our Lifetime, International Action Center, Decolonize This Place, Struggle/La Lucha, Al-Awda: Palestine Right to Return Coalition, People’s Power Assembly, International League of Peoples’ Struggle and others.

Joe Catron, the US Coordinator of Samidoun, delivered the following speech as part of the afternoon’s program of powerful chants and presentations demanding justice and liberation:

Today, in the 101st year of the Palestinian national movement, we gather at a moment of unprecedented clarity for both it and its enemies. Over the past year, two new developments – the Trump administration’s “Deal of the Century,” and the Great March of Return by Palestinians in the Gaza Strip – have drawn the existing lines of division more starkly than ever before.

On one side, we see Palestine’s historic enemies – not only the Israeli state, the Zionist movement, and the imperialist powers, but also Arab reaction, led by the dictatorship in Saudi Arabia – colluding more publicly than ever before to foist surrender onto the Palestinian people.

On the other, the looming threat of Trump’s “Deal” has inspired a new wave of Palestinian popular unity and struggle, exemplified most spectacularly in Gaza’s Great March of Return.

In 2003, the Irish writer Kevin Toolis, comparing his country’s struggle for liberation with Palestine’s, reflected: “You can’t make a deal with the dead.”

Indeed, the Palestinian national movement’s “red lines” – its unanimous demands for return and self-determination throughout the whole of historic Palestine – have always been drawn in the blood of its martyrs, forming barriers no political figure or faction would ever dare to cross.

Since March 30, 2018 – Palestinian Land Day, and the beginning of the Great March of Return – its hundreds of martyrs have demonstrated not only the strength of this Palestinian national consensus.

Their resistance, along with that of other Palestinians, has also shown where Palestine’s leadership lies: in its brigades, its prisoners, and its popular classes of workers and farmers, whose daughters and sons continue to fill the front lines of the Great March.

Finally, I would like to share a few words from one of these leaders, our comrade Ahmad Sa’adat, general secretary of the Popular Front for the Liberation of Palestine, written earlier this month from his cell in Israel’s Ramon Prison:

In order for us to accomplish our goals, to achieve our liberation, we must build an international popular front confronting imperialism. This is, was and always will be a task for all revolutionaries around the world. We stand together in one camp confronting common enemies: capitalism, imperialism, Zionism, racism and reaction.

From the battles against repressive forces and isolation here in Ramon prison to the fight to defend indigenous land and popular movements in Brazil to the movement for peasant and worker justice in the Philippines, we are labeled “terrorists” because we work to protect our land and our people; in reality, we face the same forces of terror and domination that extract our wealth and resources and exploit our people in the most brutal of circumstances…

The goal of every struggling revolutionary prisoner, whether in the prisons of the U.S., the Philippines, Turkey or the Zionist jails in Palestine, is to obtain freedom, not a momentary amelioration of torture. We are not simply seeking to moderate or reform the social and economic conditions of our people. We must be clear: we are struggling for socialism, for an alternative world – and in order to achieve victory, we must struggle together.