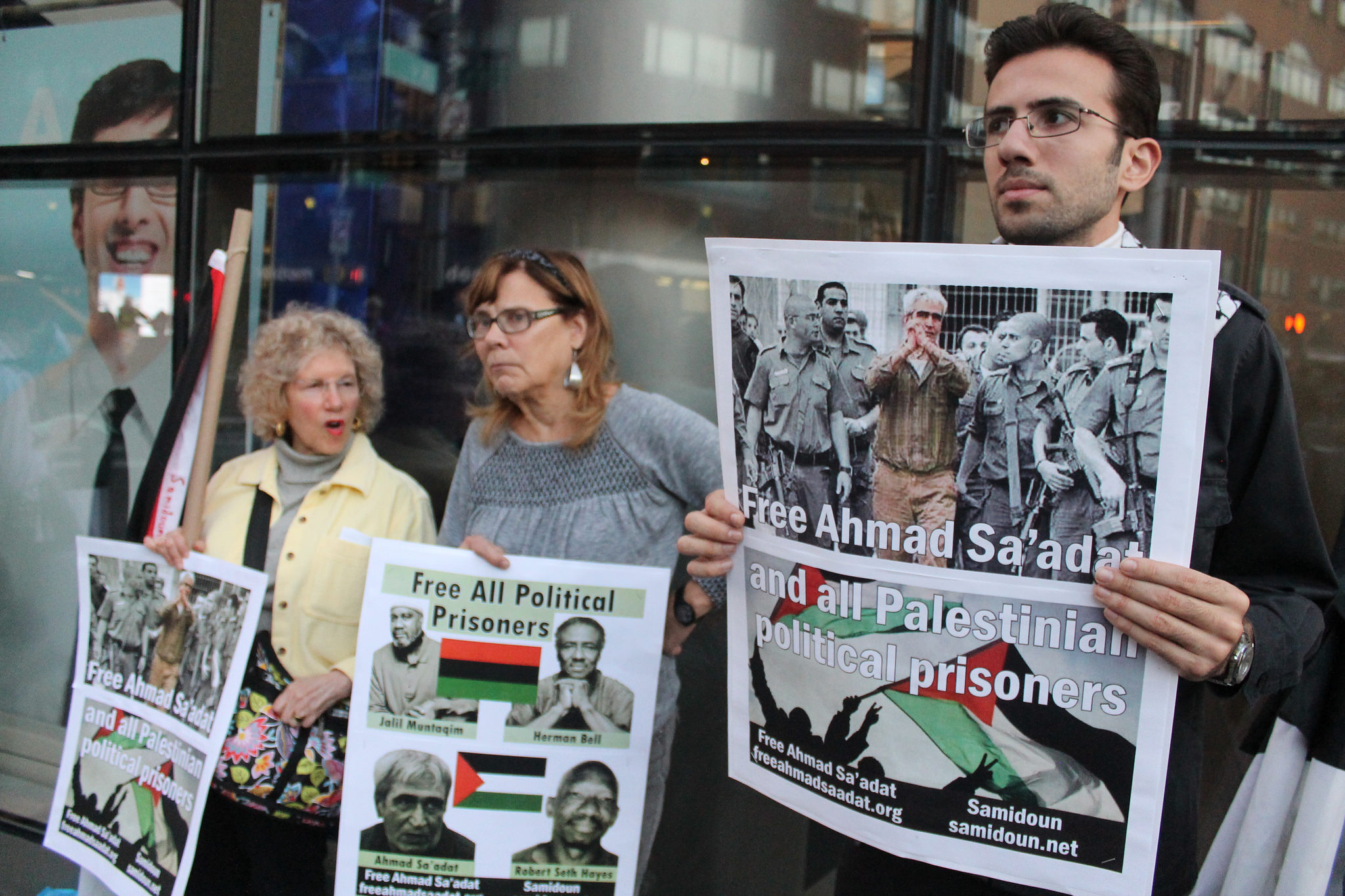 The Campaign to Free Ahmad Sa’adat sent greetings on Monday, October 4 to a New York City protest calling for freedom for Sa’adat and his fellow 6,200 Palestinian prisoners in Zionist jails.

Organized by Samidoun Palestinian Prisoner Solidarity Network in New York, the protest was also part of the BDS campaign to boycott Hewlett-Packard because of the technology corporation’s involvement in profiting from the colonization of Palestinian land and the oppression of the Palestinian people.

Protesters carried signs demanding, “Free Ahmad Sa’adat and all Palestinian political prisoners,” “Support Palestinian Resistance,” “Zionism is Racism,” and “Free All Political Prisoners.” Protesters highlighted Sa’adat’s leading role in the Palestinian liberation struggle. Sa’adat, the General Secretary of the Popular Front for the Liberation of Palestine, has been imprisoned since 2006 in Israeli occupation prisons.

He was abducted along with his comrades Ahed Abu Ghoulmeh, Majdi Rimawi, Hamdi Quran and Basil al-Asmar in a violent Zionist attack on the Palestinian Authority’s Jericho prison in March 2006 which killed several Palestinian guards and destroyed the prison. Sa’adat had been imprisoned by the PA under US and British orders and guard since 2002, in violation of Palestinian law.

Khaled Barakat, the international spokesperson of the Campaign to Free Ahmad Sa’adat and a Palestinian leftist writer, sent a statement of support to the protest, as follows:

On behalf of the international Campaign to Free Ahmad Sa’adat, we send our greetings of comradely solidarity and revolutionary support to the New York protest to free Ahmad Sa’adat and his fellow Palestinian prisoners in Zionist jails. Comrade Ahmad Sa’adat, the imprisoned General Secretary of the Popular Front for the Liberation of Palestine, is a Palestinian political leader whose dedication and commitment to the Palestinian people, their land and their liberation is extraordinary. For that reason, and alongside 6,000 other Palestinians – leaders of the struggle for return and liberation – he was imprisoned first by the Palestinian Authority, held under U.S. and British guard, seized in a violent attack that demolished Jericho prison, and now is serving a 30-year sentence in Israeli occupation prisons.

Ahmad Sa’adat is a representation of the reality in Palestine today: the leaders of the Palestinian people – the lawyers, the strugglers, the organizers, the parliamentarians, the freedom fighters, the students, the teachers – are targeted time and again for night raids, mass arrests, torture under interrogation and lengthy prison sentences. This is an attempt to deny the Palestinian people their leadership and thus hold back the tide of resistance for return and liberation.

We also salute the U.S. political prisoners, from the Holy Land Five to Mumia Abu-Jamal to Robert Seth Hayes, Herman Bell and Jalil Muntaqim. The imprisoned Black Liberation Movement leaders, Puerto Rican strugglers and Indigenous comrades behind bars in the U.S. – as well as the Palestinian community leaders serving obscene sentences for supporting their people with charity – are comrades of Ahmad Sa’adat and all Palestinian prisoners, together struggling for liberation for themselves and for all oppressed peoples.

Free Ahmad Sa’adat! Free all Palestinian Prisoners! From the River to the Sea, Palestine will be Free!