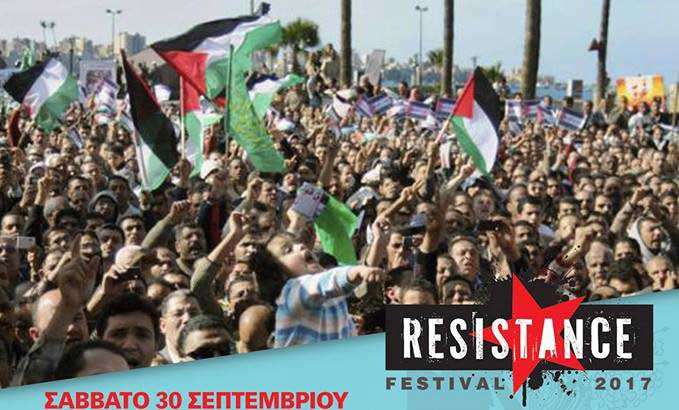 Ahmad Sa’adat, the imprisoned General Secretary of the Popular Front for the Liberation of Palestine, issued a statement to the Resistance Festival, held in Athens, Greece on September 29-30. The statement was relayed to the Festival by Mohammed Khatib, coordinator of the Samidoun Palestinian Prisoner Solidarity Network in Europe. The festival included a number of cultural performances and participants from countries around the world and movements engaged in anti-imperialist struggle, including the Deputy President of Bolivia, Álvaro García Linera; Deborah Santana of the Puerto Rican movement, and Carlos Latuff, the Brazilian cartoonist whose work on Palestine includes several images highlighting the campaign to free Ahmad Sa’adat. The festival is organized by Dromos newspaper and draws thousands of participants every year.

Sa’adat’s statement to the Festival follows:

We are writing to you today from the depths of the prison cells in occupied Palestine to salute the struggling people of Greece and to salute the organizers, comrades and participants of the Resistance Festival, a critical framework for international solidarity. We are pleased to participate in this important festival every year, as we did last year when Comrade Leila Khaled was your guest.

Needless to say, the relationship between our two peoples, the Palestinian people and the Greek people, is unshakable, historical, strong and deeply rooted. We know that it will always remain such so long as we stand together on the side of justice, liberation, democracy and equality.

Our two peoples have sacrificed so much in order to achieve these goals and guarantee peace and justice in our homelands. The working class of Greece and the working class of Palestine have been on the front lines of confrontation of imperialism, Zionism and reactionary and fascist forces. We also want to salute all those who participated in the demonstrations confronting Israeli war criminal Netanyahu and responding to our call to reject such visits with a symbol of racism, Zionism, apartheid and occupation. The demonstrations that took the streets in Athens and Thessaloniki resonated here behind prison walls in Palestine and showed clearly that the heart of the people of Greece is in one valley, and the position of your current government is in quite another.

We know that we have a common and important task today, to confront and struggle against the imposition of exploitative gas deals for the benefit of gas corporations that seek to exploit and plunder the resources of both of our people. Israel wants to steal the gas resources of the Palestinian people to serve as an instrument of domination and hegemony across the region, imposed via its “special relationship” with the United States and backed up by threatening military might. It seeks to align with European and international corporations to not only confiscate the wealth of the Palestinian people, but also to exploit the resources of the Greek people, not to fund the needs of Greece but to line the pockets of the capitalist exploiters.

Today, our people are entering 100 years of struggle against Zionism and imperialism. Since 1917, our people have been confronting colonization, settler occupation, apartheid and reactionary regimes. Throughout these years, we have accumulated a historical experience that will ensure the continuation of this struggle until our complete and inevitable victory ? the liberation of Palestine, from the river to the sea. Once again, we extend our salute to every Greek worker and student, to every struggler, to every political prisoner, to youth and women organizing, to the children of Greece. We send our strongest solidarity in common struggle to achieve all of the goals of the Greek people’s movements for true justice.

We salute the leadership of the labor movement and the student organizations in popular movements confronting capitalism and imperialism in Greece, and we also express our appreciation for the warm embrace that the people of Greece have shown for refugees and displaced peoples amid the context of the harsh economic conditions created by the policies of the European Union and international financial institutions in order to devour the wealth of the Greek people. All of our peoples are standing together, as victims of imperialist aggression and attack who together seek not only survival, but freedom, resistance and liberation.