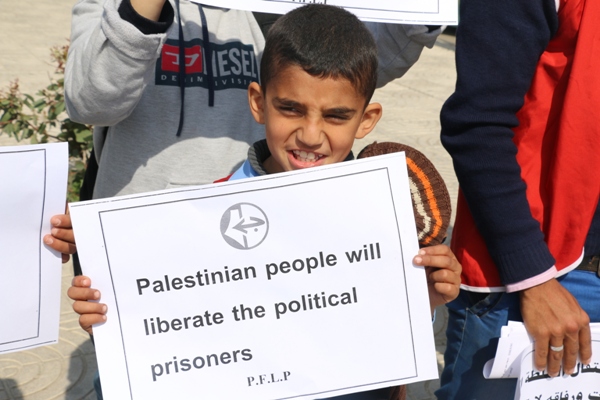 The Campaign to Free Ahmad Sa’adat in the Gaza Strip held a protest demanding an end to Palestinian Authority security coordination with Israel, on the ninth anniversary of the attack on Jericho prison and the abduction of Ahmad Sa’adat, Palestinian leader and General Secretary of the Popular Front for the Liberation of Palestine, and his comrades.

“The crime of the attack on Jericho goes beyond mere electoral propaganda for the war criminal Olmert, or the stated Zionist goal to arrest the PFLP leaders who avenged the blood of the assassinated leader Abu Ali Mustafa through the targeting of the racist, criminal state terrorist Rehavam Zeevi. The goal of the assault on Jericho was to target the very idea of resistance represented by Sa’adat and his comrades, to attempt to defeat and liquidate it,” said the organizers of the protest.

The participants carried a coffin with the Zionist flag and the words “Security Coordination” written on it, which they burned in an expression of their demand to bring the destructive, liquidationist policy of security coordination – and the Zionist occupation – to an end.