The Campaign to Free Ahmad Sa’adat strongly endorses the following campaign. On Wednesday, August 20, Khalida Jarrar, member of the Palestinian Legislative Council – and Ahmad Sa’adat’s colleague in the Abu Ali Mustafa Bloc – was raided in her Ramallah home by occupation soldiers. She was issued a military order of expulsion to Jericho. Khalida has refused, and is engaged in a daily protest sit-in outside the PLC building in Ramallah. Please take action to support Khalida! 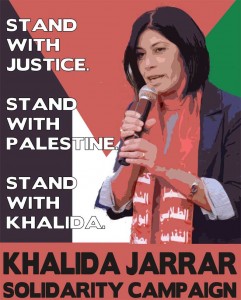 Khalida Jarrar, member of the Palestinian Legislative Council, leader in the Popular Front for the Liberation of Palestine, and longtime advocate for Palestinian political prisoners, was given an internal expulsion order by Israeli occupation soldiers who invaded her Ramallah home at 1:30 am on August 20, 2014 ordering her expelled from Ramallah to Jericho within 24 hours. Click here to take action and stand with Khalida!

Approximately 50 soldiers surrounded Jarrar’s home, delivering the “Special Supervision Order” that ordered her to Jericho within 24 hours, and to stay within the city limits of that city for an initial period of six months. The Order (unofficial translation here) comes from an Israeli military court, is based on secret evidence and offers nothing more than allusions to “intelligence information” to justify this forced expulsion and transfer.

Jarrar refused to sign the expulsion order, saying “you, the occupation, are killing our Palestinian people. You practice mass arests, demolish homes, kidnap people from their homes and deport them. It is you who must leave our home.” She has moved to stay in a “protest tent” outside the legislative council building in Ramallah. She announced that she is going to stay and continue her work from there until the decision is revoked.

From the expulsion of over 750,000 Palestinians from their homeland in 1948 – including Khalida Jarrar’s family – and the denial of their right to return for over 66 years; to the deportation and attempted deportation of Palestinian mayors outside Palestine; to the stripping of the Jerusalem ID’s of elected PLC members Mohammad Abu Tir, Ahmad Atoun, Mohammed Totah and Khaled Abu Arafah; to this expulsion order, there is a long line of Israeli attempts to threaten Palestinian life through displacement and expulsion.

Who is Khalida Jarrar

Jarrar is a long-time Palestinian political prisoners’ advocate, former executive director of Addameer Prisoner Support and Human Rights Association and a member of its board; she chairs the Prisoners’ Committee of the Palestinian Legislative Council. She is also active in the Palestinian women’s movement, a feminist and prominent voice for the defense and expansion of women’s rights.

Jarrar has been a visible and prominent participant in the West Bank demonstrations in support of Palestinians in Gaza, denouncing the occupation military’s killing of over 2,000 Palestinians.

Since 1998, she has been forbidden to travel outside occupied Palestine; when she needed medical treatment in Jordan in 2010, she struggled for months in a public campaign before finally receiving her treatment.

The forced transfer of Khalida Jarrar violates international law and the Fourth Geneva Convention, which prohibits so-called “assigned residence” unless it is “absolutely necessary” and forbids forced collective or individual transfer of protected persons from one area of occupied territory to another. The military order for Jarrar’s forced expulsion contains only vaguely worded references to “intelligence information” and “protecting the security of the region.”

The invasion of Jarrar’s home and the delivery of the expulsion “special supervision order” took place within so-called “Area A,” allegedly under the complete security control of the Palestinian Authority under the Oslo Agreements.

Despite this, Israeli occupying forces were allowed to enter Ramallah and invade Jarrar’s home; as Addameer notes, “the so-called ‘security co-ordination’ between Palestinian Authority security forces and Israeli occupying forces allowed for the expulsion of an elected representative of the Palestinian people, an elected representative who has continuously called for an end to such ‘coordination.’”

1. Click here: Send a message to the Israeli Occupation Forces and demand they cancel the “special supervision order” imposed upon Khalida Jarrar. It is important that the occupation learns that Khalida has supporters around the world who will not be silent in the face of this injustice.

2. Endorse the sign-on statement demanding the cancellation of the expulsion order against Khalida Jarrar. Click here to add your individual or organizational endorsement!

3. Contact your Member of Parliament, Representative, or Member of European Parliament. The attack on Khalida is an attack on Palestinian parliamentary legitimacy and political expression. Parliamentarians have a responsibility to pressure Israel to cancel this order.

4. Use the Campaign Resources to inform your community, parliamentarians and others about Khalida’s case.

5. Protest at the Israeli consulate or embassy for Khalida Jarrar. Bring posters and flyers to your next community protest in solidarity with Palestinians in Gaza about Khalida’s case. Hold a community event or discussion, or include Khalida’s case in your next event about Palestine and social justice.

6. Boycott, Divest and Sanction. Hold Israel accountable for its violations of international law. Don’t buy Israeli goods, and campaign to end investments in corporations that profit from the occupation. Learn more at bdsmovement.net.