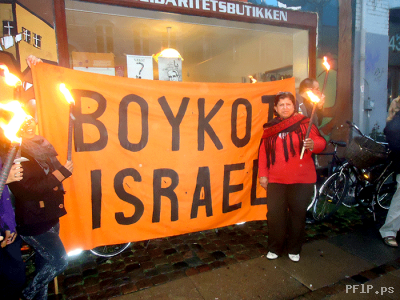 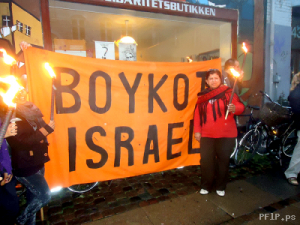 The International Forum in Denmark, a leftist, anti-racist association, invited Abla Sa’adat, the wife of imprisoned Palestinian leader Ahmad Sa’adat to an international day of solidarity with prisoners held in Copenhagen, Denmark, with events in several Danish cities.

The Forum held a program on Sepember 14, commemorating the Sabra and Shatila massacres with candle-lighting to remember the martyrs of the massacre and calling for accountability for the perpetrators. On the following day, Sa’adat spoke at the opening of a photography exhibition in solidarity with the Palestinian people. She called for the release of Ahmad Sa’adat and all Palestinian and Arab prisoners in Israeli jails, calling upon the Danish public to boycott Israeli goods. She spoke with the Danish media during her visit, including a television interview at the headquarters of the Communist Party of Denmark, in which she discussed political developments and the Palestinian struggle.

She met with the Danish Friends of Freedom for Ahmad Sa’adat, a group formed to advocate in solidarity with Sa’adat, reviewing the latest developments in Zionist jails, and in particular recent months of pressure to which prisoners have been subjected including the refusal of the prison administration to implement their agreement with the prisoners signed after a massive 28-day hunger strike. Sa’adat emphasized the importance of building international solidarity campaigns with Palestinian prisoners, including Ahmad Sa’adat..

She concluded her visit on September 24 with a symposium in Aalberg, Denmark, discussing Sabra and Shatila and the struggle of Palestinian refugees in Lebanon and elsewhere to the present day.