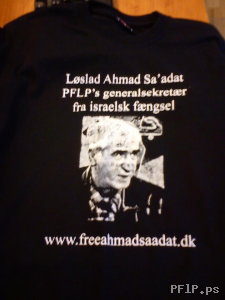 The Danish Campaign to Defend Ahmad Sa’adat issued t-shirts bearing the image of imprisoned Palestinian national leader, the general secretary of the Popular Front for the Liberation of Palestine, Ahmad Sa’adat, on the sixth anniversary of the siege on Jericho prison and his abduction by occupation military forces and the tenth anniversary of his seizure by Palestinian Authority forces.

The T-shirts call on the front to free Ahmad Sa’adat, and call on the back to free all Palestinian prisoners from the prisons of the occupation.