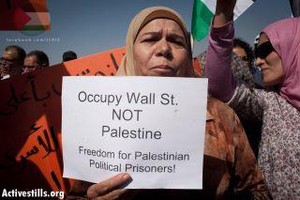 A Call from Occupied Palestine to the Occupy Movement

Only one week after promising Palestinian political prisoners that isolation would end and that all prisoners in isolation would be returned to the general population, in order to convince those prisoners to end their hunger strike, Israeli authorities have announced their intention to continue the isolation of Ahmad Sa’adat for at least one more year.

As reported by the Addameer Prisoner Support and Human Rights Association, an Israeli court in Bir Saba issued a ruling on October 27, 2011 to extend the isolation of Ahmad Sa’adat for an additional year. Ahmad Sa’adat has already been held in isolation for over two and one-half years. His release from isolation was a key demand of Palestinian prisoners’ recent hunger strike – and was promised to them one week ago.

The ruling, which was based on secret evidence like all such rulings, dates back to August 8 but was not released until today; Ahmad Sa’adat was not accompanied by lawyers in the hearing.

20 Palestinian prisoners remain in isolation, despite the strike’s suspension on October 17. Israel had promised that they would be released from isolation immediately following the release of 477 prisoners in a prisoner exchange agreement – however, Israel’s prison administration has acted in complete violation of its word.

On October 18, UN Special Rapporteur on Torture Juan Mendez called in the UN General Assembly for all use of isolation longer than 15 days to be banned, saying that isolation can cause “severe mental pain or suffering” and “can amount to torture or cruel, inhuman or degrading treatment or punishment when used as a punishment, during pre-trial detention, indefinitely or for a prolonged period…Segregation, isolation, separation, cellular, lockdown, supermax, the hole, secure housing unit… whatever the name, solitary confinement should be banned by states as a punishment or extortion technique.”

The punishment, isolation and extortion of Ahmad Sa’adat for his ongoing courage and commitment as a leader of Palestinian prisoners and the Palestinian people must end. International action and solidarity is necessary!

The Campaign to Free Ahmad Sa’adat reprints the following call received from activists in Palestine:

A Call from Occupied Palestine to the Occupy Movement – From occupied Palestine, from our occupied lands, from our camps of refuge, from the prisons of torture and the prisoners of freedom, from our stolen lands, our chained borders, our demolished homes and our revolution, our commitment, our struggle for freedom:

For us, the word occupation has always stood for colonialism, land theft, genocide, dispossession, and death. It is a word and a concept we have fought to bring to an end for over sixty years. Yet the Occupy movement that has arisen in public squares, in cities and towns around the world, from the centre of imperialism in the US, Wall Street itself, is an occupation that can serve as a source of hope for liberation, for decolonization, for an end to the racist occupation of our homeland.

Seeing the youth of the West in the streets rejecting the brutal consequences of the system of imperialism and capitalism once more, we salute you, we stand with you, and we call: “Occupy Wall Street, Liberate Palestine!”

Our political prisoners stood steadfast through three weeks of hunger strike and have today been confronted by yet one more lie, another broken promise on the heap of lies and broken promises of the occupier – rather than our prisoners being freed from isolation, they are remaining in isolation. Ahmad Sa’adat, Palestinian national leader, having already spent two and a half years in solitary confinement, is slapped with yet one more year.

We call upon you to make it clear that despite solitary confinement, Ahmad Sa’adat and the Palestinian prisoners are not isolated, and are part of a global movement and global solidarity. We call upon you to raise the voices, the pictures, and the stories of Palestinian political prisoners at Occupy Wall Street and all Occupy movement events. We, the Palestinian people are also the 99%, those victimized by war profiteers, by racism, by imperialism, by displacement and genocide. Our thousands of prisoners remain in the prisons of the illegal, illegitimate occupier.

Raise their voices among yours, and stand together for the liberation of Wall Street, Palestine, and all of our oppressed and stolen land and people!

1. Picket, protest or call the Israeli embassy or consulate in your location and demand the immediate freedom of Ahmad Sa’adat and all Palestinian political prisoners. Make it clear that you expect the demands of Palestinian prisoners on hunger strike to be immediately implemented, including an immediate end to the isolation of Ahmad Sa’adat!  Send us reports of your protests at Israeli embassies and consulates.

2. Bring the struggle of Palestinian prisoners to Occupy protests, as will happen in New York City on Friday, October 28 (Existence is Resistance Kuffeya Day) and has happened in New York, Chicago and San Francisco. Download and distribute the flyer, hold a rally or teach-in and express solidarity.

3. Distribute the free downloadable Campaign to Free Ahmad Sa’adat flyer in your community at local events.

4. Write to the International Committee of the Red Cross and other human rights organizations to exercise their responsibilities and act swiftly to demand that the prisoners’ demands are implemented. Email the ICRC, whose humanitarian mission includes monitoring the conditions of prisoners, at JER_jerusalem@icrc.org, and inform them about the urgent situation of Ahmad Sa’adat. Make it clear that isolation is a human rights violation, a form of torture, and that Palestinian prisoners were coerced into stopping their hunger strike with false promises of the recognition of their rights, and that the ICRC must stand up and play its role to defend prisoners’ rights.

5. Email the Campaign to Free Ahmad Sa’adat at campaign@freeahmadsaadat.org with announcements, reports and information about your local events, activities and flyer distributions.