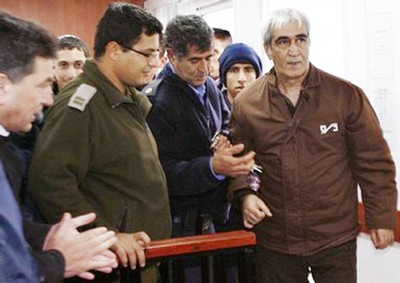 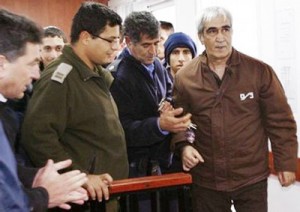 Palestinian prisoners in several prisons, including Nafha prison, reported that they were threatened that family visits would be denied in retaliation for their participation in the hunger strike. Israeli prison officials told the prisoners that for each day they spent on hunger strike, they would be banned from family visitation for 1 month.

The Israeli occupation prison service also transfered prisoners from Departments 13 and 14 in the Nafha prison to other prisons; their location remains unknown. Two prisoners in Nafha, members of the Popular Front for the Liberation of Palestine who were abducted from Jericho prison with Ahmad Sa’adat have also been placed in isolation, Hamdi Qur’an and Basil al-Asmar.

During a family visit, Israeli occupation prison authorities confiscated the identity cards of the families of Palestinian prisoners Mahmoud Abu Wahdan and Raed Sayel. The families were told that because their imprisoned relatives refused to break their hunger strike, they were not allowed to visit them.

In the Ofer prison, Israeli authorities placed 9 detainees – members of the PFLP – in solitary confinement and confiscated all their personal effects, clothing and other belongings.

In Asqelan Prison, the Israeli prison administration prevented lawyers from visiting detainees. A lawyer who came to Asqelan to visit prisoners Ahed Abu Ghoulmeh, Allam Al-Kaabi, and Shadi Sharafa was banned from visiting the prisoners and informed that these three and all prisoners from the PFLP who are on hunger strike are prohibited from receiving lawyer visits.

Earlier in the day 20 prisoners from the Fateh party joined the open hunger strike, including the oldest Palestinian prisoner, Fakhri Barghouti, who entered his 34th year in Israeli prisons, and Akram Mansour, who has been imprisoned for 33 years and is quite ill with cancer. Additional prisoners will join the hunger strike in the next few days.

In the Negev prison, Anas Al-Shanti was placed in solitary confinement. In Ramon prison, prisoner Basem Al-Khandaqjy, a member of Central Committee of the People’s Party, joined the hunger strike.