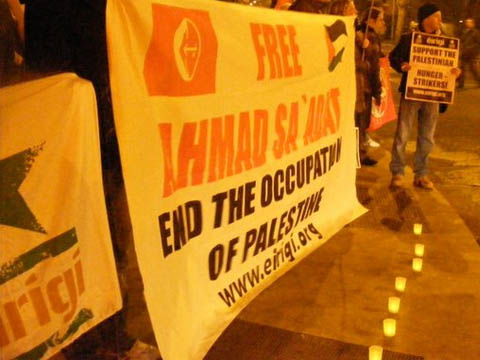 The following report was received from éirígí, announcing their latest action in support of Palestinian prisoners, in particular Ahmad Sa’adat: 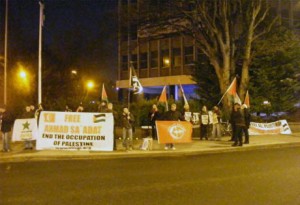 Up to 25 people attended a candle light vigil at the Israeli embassy in Dublin on Wednesday [January 19].

The vigil, organised by éirígí, was held to highlight an ongoing hunger strike by two Palestinian prisoners – Ahmad Sa’adat, the general secretary of the Popular Front for the Liberation of Palestine, and Jamal Abu Al-Haija, a leader of Hamas.

Protesters at the Israeli embassy, gathered from 6.30pm with placards and banners, some of which read ‘Support the Palestinian Hunger Strike’ and ‘Free all Palestinian Prisoners’. A number of éirígí, PFLP, and Palestinian flags were also on display.

Protesters chanted slogans such as ‘From the River to the sea, Palestine will be free’, ‘Free, Free Palestine’ and ‘Israel terrorists’ and received a lot of encouragement from passing motorists. 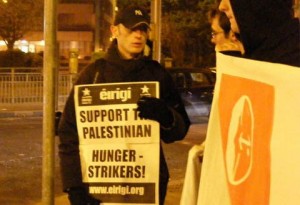 Sa’adat and Al-Haija have been on hunger strike for four weeks in protest against the serious and deliberate mistreatment of political prisoners by the Israeli authorities. Both men have been held in isolation by the Israeli regime for most of the last two years, and have been denied medical treatment and visits with their families. Since embarking on Hunger strike, the Israelis have moved to further punish these men by moving them to total solitary confinement.

The PFLP have said Israel is directly responsible for both men’s lives and have called on international human rights groups to intervene on the men’s behalf. 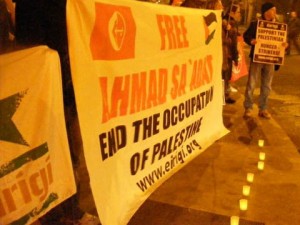 éirígí extends our solidarity to Ahmad Sa’adat and Jamal Abu Al- Haija and will continue to highlight their hunger strike here in Ireland. 2011 marks the 30th Ann of a hunger strike by Irish Republican prisoners in the H-Block and Armagh Gaol’s against the inhuman conditions and for their rights as political prisoners. We in Ireland understand only too well the seriousness of the situation when you have no option left but to use your body as a weapon.

éirígí calls on the Israeli authorities to release all Palestinian Prisoners, and to end their daily acts of aggression against the Palestinian people.

Israel has enough blood on its hands. Supporters of the Palestinian people around the world will hold the Zionist regime directly responsible for the well being of Ahmad Sa’adat and Jamal Abu Al-Haija.