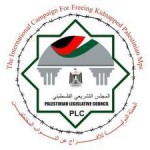 The International Campaign for the Release of Abducted PLC Members joined the October 22, 2009 day of action for Ahmad Sa’adat, the imprisoned General Secretary of the Popular Front for the Liberation of Palestine, condemning the policy of isolation against Sa’adat, also a member of the PLC.

The international campaign called Abla Sa’adat, Ahmad’s wife, expressing its support for Sa’adat’s case and its efforts to raise awareness for the issue of the abducted MPs in the Israeli jails.

Abla Sa’adat pointed out, said the campaign, that her husband had been forced into isolation for over six months depriving from all his human rights. In addition, the Israeli soldiers confiscated his personal belongings and even his books, and his family is prevented from visiting him or providing him him with clothes and books.