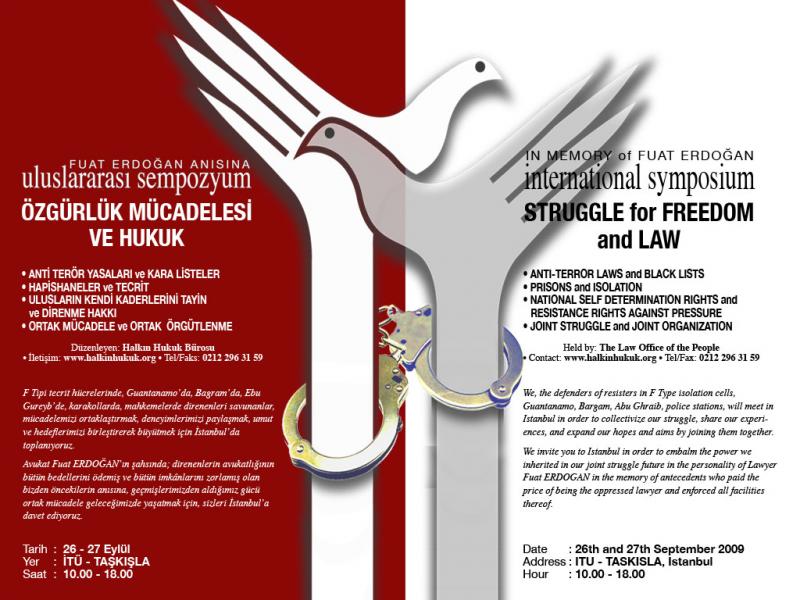 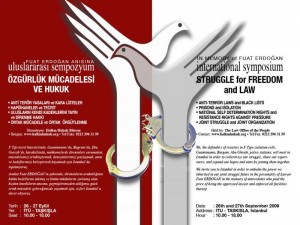 The Law Office of the People (Halkin Hukuk Borosu) held an international conference on the Struggle for Freedom and Law in Istanbul on September 26-27, 2009, bringing together people’s lawyers from around the world whose work is connected to defending and supporting resistance movements, self-determination and national liberation struggles, and political prisoners against imperialism.

The conference issued the following declaration, proclaiming support for the struggles of Ahmad Sa’adat and all Palestinian and international political prisoners, as well as support for national liberation movements and commitment to challenge so called “terror lists” as mechanisms of imperialism.

This declaration that we issue today comes as a result of the collective consciousness, determination to struggle and desire for solidarity of lawyers who lend a hand to the struggles of the oppressed, of the poor, of the peoples whose homelands and futures are under threat.

I. We know that it is a vital obligation to put a stop to imperialism, which is a global threat and a repeated perpetrator of crimes against the whole of humanity. We reject occupation and exploitation by any racist aggression. We will not remain mere spectators to a process whereby oppressed peoples are robbed of their lands and their futures.

II. Imperialist powers that have put a de facto state of emergency into operation at the global level, making such regimens usual and widespread practices, should know that it is in fact their very existence that constitutes a threat to the peoples of the world. The name of this threat is “terror”. Imperialist aggressors and collaborating local governments are the true terrorists.

III. Terror that manifests itself as imperialist aggression murders rights advocates struggling throughout the world, arrests the survivors and places them in prisons under conditions of severe isolation. Because it is intended as punishment, because it inflicts pain and suffering and because it is an intentional act, isolation is a method of torture. Alongside those who struggle for their labour, lands and futures, Simon Trinidad, Sonia and Ivan Vargas who were kidnapped from Colombia and placed in US prisons because of their resistance against tyranny, are also being held in conditions of isolation.

We salute political prisoners held in isolation in prisons all over the world and declare that their freedoms should immediately be reinstated.

Beginning with national leaders, such as the general secretary of the Popular Front for the Liberation of Palestine, Ahmed Sa’adat, and [Fateh leader] Marwan Barghouti, the thousands of Palestinian prisoners should be released immediately. We reject the Zionist regime of incarceration and occupation, and greet those who resist it. We are determined to publicize the names and struggles of all political prisoners until the day they are set free and to let the world know that they are not alone.

III. We reject the blacklists targeting persons, organizations and countries. It is those who prepare these so-called “terror lists” and those who wage attacks on peoples based on these lists that constitute the real threat to the peoples of the world. Law becomes respectable only as long as it promises freedom and secures freedoms. We renounce and deny the legitimacy of the lists, decisions and laws that the imperialists have made into texts for the domination of their ideology and into means of exploitation and threat.

IV. Alongside their families, friends and comrades, their lawyers will also not forget or let be forgotten those murdered in the resistance struggle. We promise not only to cherish their memories but also to help them live on by following in their footsteps in the freedom, independence and labour struggles.

V. It is now clear that there is no place for the Councils and Committees of the UN or for the councils and courts of the International Criminal Tribunal in solving the problems of peoples under occupation. Whatever the situation may be, we are resolute to bring charges against imperialism and its regional and national allies in every kind of trial, court or council in order to hold those responsible for the sufferings of the peoples accountable. Yet we will not hesitate to boycott unjust or illegitimate courts, laws, institutions and governments.

VI. The lawyers of those who struggle for their rights and freedoms cannot be confined to the limits of courts, prisons and police stations. We will not remain mere “spectators” to our own lives. We have decided to organize with an international awareness, to share our experiences and struggles under the same roof. With this declaration, lawyers of the oppressed announce their decision to set up a broad and powerful organization of international solidarity within the shortest possible time. This should at the same time be read as an appeal to our colleagues, who wage the same struggle around the world.

The differences of opinion and attitude that naturally exist between us, our different needs specific to our various areas and countries are not greater than our need for solidarity and our internationalist determination that constitute a powerful bond between us.

With this declaration, we address the foes and friends of peoples at the same time, reminding the former of our determination, and reinforcing the hope and conviction of the latter;

“We have come together in Istanbul. We are sharing all our professional, theoretical and political experience and knowledge to struggle against global tyranny. People’s lawyers now stand stronger and more determined in peoples’ struggles. Those who are not here with us today will join us, passing through the gateway provided by this declaration and add strength to our voice.”