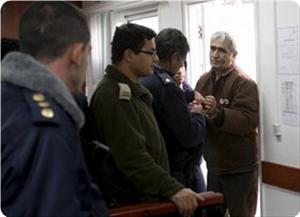 A message was delivered through Palestinian member of the Israeli Knesset, Mohammad Barakeh.

The Secretary General of the Popular Front for the Liberation of Palestine and a Palestinian Legislative Council member told Barakeh that all factions must continue the dialogue.

A long-time supporter of internal reconciliation, the prominent leftist said the Palestinian dialogue must be inclusive and that the government was to work on an interim basis until general elections could be held again in the West Bank, East Jerusalem and Gaza Strip.

The last PLC elections saw a sweeping win by Hamas followed by sanctions and arrests against the party by both the United States and Israeli administrations.

Sa’adat added his voice during this week’s meeting with Barakeh to the dozens calling for the rebuilding of the Palestine Liberation Organization. He said that it, along with the PLC, should be formed on the basis on the national project in simultaneous elections.

He also discussed rebuilding the Palestinian left, a movement disjointed during a time that a strong neutral voice is sorely missing on the home front.

Sa’adat’s comments came during the visit of MK Mohammad Barakeh, Chairman of the Democratic Front for Peace and Equality, to the Ashkelon Prison. It was four years ago that Israeli forces stormed the PA prison in the eastern West Bank’s Jericho and took Sa’adat.

The recent hunger strike which ended after nine days was held, said Sa’adat, in protest of the policy of solitary confinement in which he had been held for three months. Four of his colleagues from the PFLP were also involved in the nonviolent action. Sa’adat’s health is reportedly good and he seemed in high spirits, said Barakeh upon leaving the prison.

Sa’adat said of his hunger strike that while he had been in solitary for three months there is a high number of other Palestinians who have been isolated for many years, including one who has been held alone for eight.

The leftist also talked about the lack of family visits – he has not seen his sons in four years or his wife in three months – and the dearth of books and medical attention.

On the situation at home Barakeh said that Sa’adat expressed concern the Israeli demand that Palestinians recognize the state as one for the Jewish people. He said this is racist and impossible, particularly as the Israeli government continues to ignore international law and the United Nations.

The local and international movement in support of Sa’adat and his colleagues has its own momentum next to that in support of all 11,000 Palestinian political prisoners in Israeli prisons.