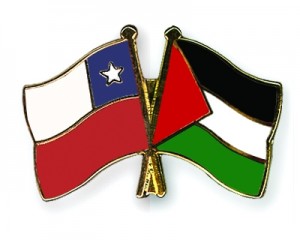 The Palestinian Federation of Chile, on behalf of the Palestinian community in our country, expresses our full and unconditional solidarity with the brother and comrade Ahmad Saadat, Secretary General of the Popular Front for the Liberation of Palestine – PFLP, a symbol of the fierce fight, dignity and resistance against the Israeli military occupation and the policy of isolation and their military aggression carried out against Palestinian prisoners. This time the comrade Saadat is on hunger strike in protest against his isolation and the abuse and humiliation that Palestinian prisoners receive daily.

The ongoing Israeli attacks against the prisoners and systematic human rights violations merely confirm the racist and inhuman policies of Israel, supported by its military power and endorsed by the Arab and international silence.

From Chile, we send our fraternal greetings to comrade Saadat and all Palestinian prisoners, noting that Israel is responsible for the health and integrity of these men and women, and demand the release of all prisoners. Israel as a military occupying power has no legal or moral right to kidnap and imprison those who struggle for freedom of their people and resist foreign military occupation.