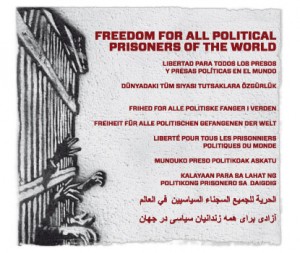 Ahmad Sa’adat, general secretary of The Popular Front for the Liberation of Palestine, has entered the second week of his hunger strike against solitary confinement. Since March 18 this year, Sa’adat has been in total solitary confinement in Israeli prison.

In 2006, Ahmad Sa’adat was elected member of the Palestinian Legislative Council. On December 25, 2008, he was sentenced to 30 years imprisonment by an Israeli “court”.

Sa’adat wishes – by his hunger strike – to draw the attention to the increase in use of solitary confinement and torture by the Israeli prison authorities, to Israel’s continued violations of human rights and principles of law. He wishes as well to show that the struggle against occupation takes place both outside and inside the prisons.

Israel tries by its brutal prison policy to weaken and destroy Ahmad Sa’adat and the other 11.000 Palestinian prisoners in Israeli prisons – and to frighten those outside the prisons from participating in the liberation struggle.