Palestinian and Arab institutions in Venezuela expressed their solidarity Ahmad Sa’adat and all of the heroic Palestinian prisoners in the occupation prisons through a joint statement issued on June 15, 2009. 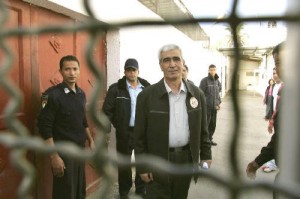 We, the children of Palestine and the sons and daughters of the Arab people in Venezuela, declare our anger and indignation at the repressive practices against prisoners in the prisons and detention centers of the occupier, which detract from the dignity and rights guaranteed to them by international law and human rights standards. Among these violations include the prevention of family visits, imposition of orange uniforms, medical negligence, and the isolation of prisoners in solitary confinement, as was done to the brother Ahmad Sa’adat, the leader of the Popular Front for the Liberation of Palestine.

We hold the occupation authorities fully responsible for the health and lives of our brave and valiant prisoners and detainees. We also call upon the Palestinian Authority to assume responsibility for the arrest of Sa’adat and his comrades from the Jericho prison, which requires rapid intervention by all means, to stop this repression against the prisoners.

We therefore call upon all democratic and progressive forces in the world to exercise their leadership in upholding human dignity and bring an end to the repressive policies against the prisoners and detainees held by the occupation state.

We call on all Palestinian and Arab associations, centers and institutions in Venezuela to launch a national campaign of activities and events in all Venezuelan cities in solidarity with the heroic prisoners languishing in the prisons of the oppressive occupation, in response to the call of our comrade Ahmed Saadat and his comrades and his brothers and fellow leaders, including Marwan Barghouti, the secretary general of Fatah in the occupied West Bank, and Dr. Aziz Dweik, speaker of the Palestinian Legislative Council, Comrade Ibrahim Abu Hajla, member of the Political Bureau of the Democratic Front and the thousands of Palestinian prisoners in prisons and detention camps the Zionist enemy.

Organizing events and activities, raising pictures of prisoners and Palestinian flags are a small contribution to the rejection of inhuman practices against Palestinian activists inside the Zionist jails.

Together for the cause of freedom, to defend the prisoners and against the occupier, from Palestine, to Iraq, to our communities here in Venezuela!

Dignity and freedom for our prisoners and freedom fighters, and recovery for our brave wounded, and glory to the martyrs!