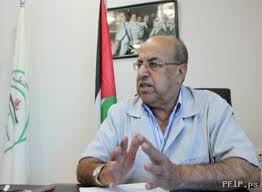 The Israeli occupation’s military court continues its hearing in the case against the Secretary General of the Popular Front for the Liberation of Palestine (PFLP), Ahmad Sa’adat. Usually the hearings, held in the fortified Opher military base near Ramallah, are very one-sided: Sa’adat refuses to recognize the legitimacy of the court, and forbids his lawyers from playing by the court’s rules. The lawyers ask the court to be reprieved from their impossible role, and are prevented by the court from resigning, but avoid any active defense. As a result, the sole manager of the court is the military prosecutor, a young and arrogant religious Jewish soldier-lawyer, and the 3 uniformed military judges follow his script to fill the trials files with “evidence”.

But this morning’s hearing was some exception. The prosecutor chose to bring as his next “witness” ‘Abed elRahim Maluh, the PFLP’s deputy secretary general. The aged Maluh (67), which was arrested in June 2002 and sentenced to 7 years imprisonment, proudly refused to be a witness, and the meeting of the of the two leaders in the courtroom allowed their common defiant stance expose the court in all its ridiculous vanity.

Seven television crews were allowed in before the hearing started, but they were repeatedly warned by the Military public relations officer that they are not allowed to ask Mr. Sa’adat any questions, and anybody breaching this order will be promptly expelled. As he was allowed in, between military guards and prison officers, Sa’adat chose the moment, before the cameras, to give a well prepared declaration on the occasion of 40 years to the 1967 occupation and 59 years of the Palestinian Nakba. He called on all Palestinian parties, and particularly Fatah and Hamas, to stick to national unity against the occupation and avoid any internal clashes. He called on the international community to recognize the democratically elected Palestinian government and to defend the Palestinians against the continuing Israeli war crimes. Before he went on to call for an end to the occupation and the establishment of an independent Palestine, the TV crews were all expelled out of the courtroom.

Later, when the judges came in, Sa’adat refused to stand up, reinstating his rejection of his supposed role as ‘defendant’. Than the guards brought in Maluh, just half the big man that he used to be before his arrest. Cuffed and in prisoner’s clothes, Maluh started with protesting at being brought without his consent. He declared he is not a witness, and doesn’t regard Ahmad Sa’adat as ‘a defendant’, and will say only what he finds fit. He said he was proud at his role as the deputy secretary general of the popular front for the liberation of Palestine, as he already declared in the military trial in which he was sentenced for this very ‘crime’. He said his main role in the PFLP was as responsible to political relations, and representing the PFLP in the Palestinian Liberation Organization, serving as member of the PLO’s executive committee. When asked who serves as secretary general of the PFLP, he said it was not his business to give such information to the court. At this stage Mr. Sa’adat from his bench intervened to ask the judges to stop this ridiculous show, as they know very well that he is the secretary general. Apparently, the judges changed tactics with Mr. Sa’adat, refusing to ‘recognize’ his declarations. One judge told Mr. Sa’adat that if he will stand in front of them they will write down his words.

An extra surrealistic flavor was added to the whole event by the incredible translator, a young Jewish soldier, which mixed almost every sentence. Apparently he couldn’t catch the difference between the popular front for the liberation of Palestine and the PLO, and had no knowledge of basic terminology like “the executive committee”. So the court was held in two separated worlds, the Arabic world of freedom fighters resisting the occupation, and the Hebrew occupation world where the resistance is posed as criminal activity. Any communication between these two worlds under Israeli Apartheid was based on misinterpretation, just as the Opher military camp is posed in the middle of the Apartheid walls, separating between “Israeli” and “Palestinian” spaces.

As the court was dispersed until 29/7, Maluh and Sa’adat were dragged back to the Hadarim prison, and we went out from the Apartheid court to the Apartheid world. Most Palestinian families are not allowed to go out of the “Israeli” side of the fence, even though it is well within the 1967 occupied West Bank, within densely populated Arab area, while Israelis are not allowed at the Palestinian side. One old lady was stuck between the fences. She came with a Red Cross bus full of families that came to visit at Opher prison about 200 meters in the blue side of the fence. But as she came to the court to see arrested relatives, she couldn’t cross again to Israeli territory to catch her bus. As we went away the international community was still failing to protect the rights of one old Palestinian lady to go back home.