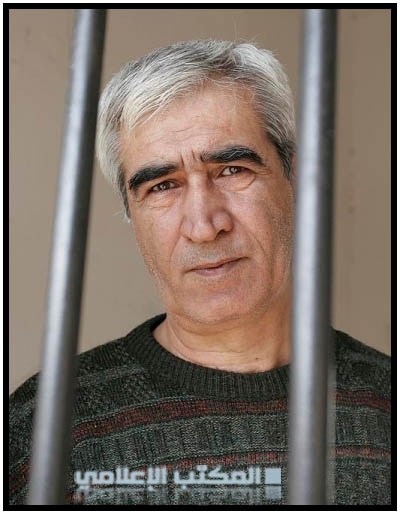 Introduction: On March 14, Israeli troops stormed the Palestinian prison of Jericho, where PFLP secretary general Ahmed Saadat and four other PFLP members were being held for their alleged implication in the execution of Israeli Tourism Minister Zeevi in 2001. Israel’s blatant and illegal act of aggression in Jericho has been widely condemned. Saadat and his comrades are now political prisoners in the hands of Israel. The Belgian weekly Solidaire may have been the last media outlet to have interviewed Saadat before his capture by Israel.

A meeting with Ahmed Saadat, Palestinian representative (PFLP), in his prison cell in Jericho 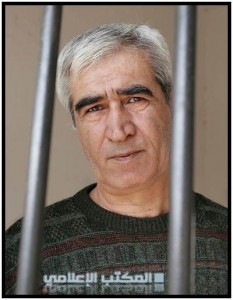 We meet the Palestinian representative Ahmed Saadat in his prison cell. He is the secretary general of the People’s Front for the Liberation of Palestine (PFLP) and one of their three recently elected representatives. He is detained for four years already in Jericho, guarded by 18 British and US soldiers. An exceptional interview with an exceptional man.

Saturday February 11, 7 a.m. I start my journey to the prison in Jericho and that is no mean feat. The trip to Jericho, a city in the eastern part of the West Bank is the biggest challenge. After Bethlehem, you have to pass at least two checkpoints of the Israeli army. (On my way back, I had to pass four of them.)

All visitors have to undergo a body search by Palestinian security personnel under supervision of a US soldier in civilian clothes. Cameras and mobile phones are forbidden. I have to go through two doors and a metal detector before I enter the courtyard that is surrounded by the prison cells. They lead me to one of these cells. Inside it is quite comfortable and I am offered tea, coffee and cookies. It is Ahmed Saadat who welcomes me. He looks tired and talks about his four children who are visiting him once in a while. His wife, on the other hand, has been placed under house arrest recently by Israel for at least six months. We are talking for four hours, frequently interrupted by visiting friends.

For us, Europeans, it is hard to understand that a prisoner can be elected to the parliament. How did that happen?

Ahmed Saadat. My story is not different from those of many other freedom fighters who fight for national liberation. But I have also been detained because I’m the secretary general of the PFLP (the Popular Front for the Liberation of Palestine). The Palestinian Authority has arrested and detained me because of Israel’s pressure on American and European governments. They have issued an international arrest warrant and have pressured the Palestinian Authority to arrest me and other comrades.

It is not surprising that the United States and the European Union have put the PFLP on their lists of terrorist organizations: it serves to brand the whole Palestinian resistance as terrorists. It is part and parcel of the American policy to impose its hegemony on the rest of the world.

The PFLP was able to have three of its candidates elected to the Palestinian Legislative Council. What’s your assessment of this result?

Ahmed Saadat. Of course we are not satisfied with this result and we are doing our best to grow in strength. Definitely, the result does not accurately reflect the PFLP’s real influence on the terrain. The elections have been overshadowed by the contradictions between Fatah and Hamas and the people’s desire to oust Fatah, which has been dominant in the Palestinian Authority. The people thought that possibly Hamas could be capable to change the current situation.

What does the PFLP stand for?

Ahmed Saadat. The PFLP is a legal Palestinian party that aims to liberate the people from the occupation. Like Hamas we want to continue the Intifada. We reject the Oslo Agreement (the so-called peace agreement signed in 1993 by Israel and the Palestinian Liberation Organization) and the Road Map (the so-called peace agreement imposed by the United States, the European Union, Russia and the United Nations in 2003). Just like Hamas we refuse to recognize Israel as long as our national rights are not recognized.

There is no hope in negotiations with Israel because they refuse to negotiate with the Palestinians. The new Israeli party Quadima (established by Sharon) has built its program around the current state of affairs in order to impose its Zionist territorial program: 60% of the West Bank has to be confiscated evicting its Palestinian population, and a purely Jewish state has to be established. The road map is leading us to the situation before the Intifada and wants to impose a compromise about the UN resolutions that are recognizing our legitimate rights. We don’t need any negotiations about these resolutions. We want to see them implemented.

Ahmed Saadat. The only livable solution for the historic conflict between Israel and the Palestinian people is the establishment of one democratic state in the historic Palestine that existed before 1948. That is currently not realistic and therefore we have to anticipate an intermediate stage with an independent Palestinian State within the borders of 1967: the whole West Bank and the Gaza strip with Jerusalem as its capital. In this intermediate stage the Palestinian refugees’ right to return has to be guaranteed.

The PFLP is using several methods in the liberation struggle. It is a people’s party with several people’s organizations for the workers, the women, the students, the intellectuals. Moreover, we organize social services to help the people in the field of health care, agriculture, education, arts, human rights.

What does your economic and social program look like?

Ahmed Saadat. It is based on the strengthening of democracy in all its aspects: the establishment of an independent economy, according to our legitimate right to resistance, our right to create the objective conditions for our people that enable the liberation and national independence.

Our program tries to serve the interests of the whole people and aims to improve the living conditions of the peasants and the poor. It wants to solve the massive unemployment and ensure equal opportunities for everyone to develop professional skills. Therefore, the institutions of the Palestinian Authority will have to be rehabilitated.

In the field of the economy, our program highlights in the current phase the unification of the public and the private sectors in order to create the basis for the national and self reliant Palestinian economy.

How do you assess the recent victory of Hamas?

Is an alliance with Hamas possible?

In the meantime, the PFLP tries to build a left Palestinian project with all Palestinian organizations that claim to be left and especially with the Democratic Front for the Liberation of Palestine (DFLP). This project is based on a clear vision and on our Marxist identity, our struggle for independence and class struggle, linked with the national struggle at the regional, Arab level, with the international people’s struggle and the international revolutionary movements.

Which are points of divergence with Hamas?

Hamas knows that it cannot implement its program today. We have asked them about their plans and they answered that the implementation of their Islamic program is impossible as long as the occupation lasts.

Also in the field of the economy we have our differences with Hamas. They try to build a liberal, capitalist economy while we are advocating an integrated economy with unity between public and private sectors as a first step towards a socialist economy and a basis for an independent and strong national economy.

You said that it is important to wage a national struggle on the basis of class struggle. What do you mean?

The Palestinian bourgeoisie wants to end the struggle against the occupation and is willing to agree to any compromise with Israel in order to defend its own economic interests. Here in Jericho, for example, the Palestinian Authority has built a casino with financial support from Ariel Sharon’s son Omri!