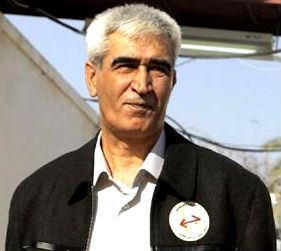 “The struggle for a single, democratic state, without any kind of ethnic or religious discrimination, should never end”

Interview with Ahmed Saadat, Secretary-General of the PFLP, in a Palestinian prison in Jericho. By Mireill Terrin, Chris den Hond

Ahmed Saadat, Secretary-General of the PFLP, is held in a Palestinian prison near Jericho, with three [sic] members of the squad that in October 2001 executed the far-right [Israeli] Minister of Tourism, Zeevi, in response to Israel’s assassination of Abu Ali Mustafa, leader of the PFLP. Just like the farce of a trial that was carried out inside the besieged Muqata in April 2002 to suit Sharon’s demands, the conditions in which they are detained are grotesque.

They are guarded by Palestinians, but they are watched from the rooftops and have their communications constantly monitored by U.S. and British soldiers using a network of microphones and jamming equipment… all “for their own protection”.

One of the members of the commando team, who was sentenced in April 2002 to one year in jail, is still detained – for his own good, of course – even though he should have been freed eight months ago.

A few days before the PFLP announced its support for Mustafa Barghouti’s candidacy in the presidential elections, we met Saadat and his comrades in prison.

Q: The Palestinian High Court ordered your release many months ago. Why are you still in prison?

A: This isn’t the first time that a decision of the High Court has not been carried out. There are tens of other rulings that have never been implemented. One part of the Palestinian Authority’s “security obligations” is to yield to to the demands of the Americans and the Israelis. That is why we are still here, held hostage, as proof of the PA’s goodwill.

Q: The Americans and Israelis used to describe Yasser Arafat as an “obstacle to peace”. Will his departure from the scene change anything?

A: First we need to define what they mean by an “obstacle”. For the Israelis, any Palestinian leader who does not accept Israel’s demands in their entirety is already an obstacle. If Abu Mazen and the next government defend the fundamental rights of the Palestinians, they too will be regarded as obstacles. In fact Olmert has just declared that it will be impossible to sign a peace agreement with Abu Mazen because of his support for the refugees’ right of return!

A: We are not putting forward a candidate firstly because we refuse to endorse the Palestinian Authority that resulted from the Oslo Accords. It is already unacceptable to take part in elections under occupation, but we believe even more that these elections should have been comprehensive, with the renewal of all the institutions of the PA, the Palestinian Legislative Council, and the local authorities. The fact that the Presidential and Parliamentary elections are being held at different times makes us doubt whether this is really a step towards democracy. These elections should be another means of resisting the occupation, a means of self-determination. Instead, Israel and the US are trying to impose on us a democratic change that corresponds to their needs and denies us the right to self-determination.

Despite this, we tried to agree upon a single candidate of the left. We met with other groups – with the Palestinian Peoples’ Party (PPP, formerly the Palestinian Communist Party), with the DFLP (Democratic Front for the Liberation of Palestine), and even with FIDA, part of which supports the Geneva Accords.

We carried out discussions about a common platform, which was the most important thing for us, much more so than the question of personalities. We wanted a platform that truly was of the left. We had differences with the DFLP, which includes the Road Map in its party platform, and with the PPP which accepts the principles of the “Arab initiative” on the refugees’ right of return, an initiative that destroys the very principle of the right of return, by introducing quotas and giving Israel veto power over the refugees’ return.

In spite of these differences, we continued the discussions.

And then we had the unpleasant surprise of discovering that the PPP and the FDLP had already designated their own candidates, Bassam Sahali for the PPP and Tayser Khaled for the FDLP.

Q: The PFLP decided to support the candidacy of Mustafa Barghouti in this election. Do you think he is really a candidate of the left?

A: We would have preferred a candidate who was clearly anti-capitalist, and it’s true that Mustafa Barghouti is no revolutionary. But he was open and honest with us, and he accepted some key points in our programme, like the right of return and support Palestinian resistance in all its forms.

Mustafa Barghouti is a symbol at the national and international level, by virtue of his presidency of the PMRC (the Palestinians’ leading medical NGO). His positions haven’t always been very clear, but our aim is to help him evolve. If we don’t succeed, then we haven’t lost anything. We still have our own political positions, our own programme.

Q: If Marwan Barghouti had finally decided to run, would you have supported his candidacy?

A: Marwan Barghouti is a Fatah leader. He was shaped by Fatah, and he will always follow the party line. Of course we make a distinction between Abu Mazen and him but, in the final analysis, they both represent the same ideology and the same platform, in the service of the Palestinian middle-class.

Q: Do you think that the two state solution is viable?

A: The two state solution is a starting point which will create the necessary climate for a peaceful solution. Of course, the fight for a single democratic state, without any kind of ethnic or religious discrimination, should never end, because it is the only possible solution that can solve the problem of the Palestinians of 1948 and of the right to return. In this fight we need international solidarity and unity from those who struggle along with us. As Palestinians and also as PFLP, we are proud of all these actions of solidarity with the Palestinian people.