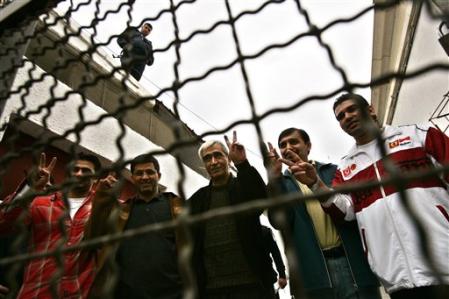 “On The Strategic Level, We Want To Create A Pole Of The Democratic Left”

Last August, we talked to Ahmad Sa’adat in Jericho prison; a Palestinian prison, where he is monitored by the British and the Americans. Ahmad Sa’adat became the Secretary-General of the PFLP (Popular Front for the Liberation of Palestine) after the previous leader, Abu Ali Mustafa, was assassinated by an Israeli missile in his Ramallah office in August 2001.

Q: How would you assess the withdrawal from Gaza?

A: The withdrawal of Gaza is above all the fruit of our people’s resistance. The cost of the occupation became too high for the Israelis, and they found themselves in an impasse. But the withdrawal does not yet mean the end of the occupation, because our sovereignty over the airspace, the sea and the land is not complete.

Other victories are possible, because there are not only two ways: i.e. the way proposed by Israel or the way proposed in international plans (like the Road Map). There is also the way of struggle. This is the way that will allow us to put an end to the occupation and to give our people the right of self-determination and their national rights. Both their national right to build a Palestinian state in the West Bank and Gaza, and to establish a national and democratic state on all Palestinian land, a state that will unite Arabs and Jews. This state will not be established on the basis of race, religion, colour or gender. But reaching it requires a clear Palestinian vision in the form of a hard-hitting plan that will sweep aside political initiatives that treat the Palestinian people’s struggle as a security problem, or regard their struggle as terrorism, or make the security of Israel the basis of the peace talks.

For example, the Road Map is a negotiating project, and not a solution. It makes security the central issue again. It isn’t a solution to the Palestinian problem, and that’s why we need to find an alternative.

Our alternative is based on the diplomatic and political struggle, on what the Intifada has achieved, and on international resolutions, above all on the recommendations of the Hague [i.e. the International Court of Justice]. On this basis, we are calling for an international peace conference, under the patronage of the U.N. and based on U.N. resolutions. These guarantee our people their right of self-determination, and of independence, and the right of the refugees to return.

If Sharon’s proposals or conditions are accepted, Sharon would impose his political conditions which are based on the theft of a large part of our land (especially in the West Bank, because Sharon hopes that his withdrawal from Gaza will leave him a free hand in the West Bank) through the construction of the Separation Wall, creating a fait accompli for any future negotiations. The same thing would happen whether or not the resistance continues. There is no other choice.

The wall closes off 58% of the land on the West Bank. It separates East Jerusalem from the West Bank and assists the process of making that city Jewish. Unfortunately, Sharon’s policy of colonization has the support of Bush, who has gave him new guarantees in 2004. In these guarantees, the return of the refugees is regarded as an obstacle to peace. He thinks that the West Bank settlements are a reality that can’t be undone through peace negotiations. Bush clearly supports the policies of Sharon. Every day we read in the papers how Israel is building this colony or expanding another, and the building of the wall never stops.

This is the end of the possibility of a sovereign Palestinian state. In this way the West Bank will be divided into bantustans. According to Sharon, the bantustans can be linked to each other by roads through tunnels… A state that is divided into distinct bantustans and separated by a wall is not a state, because it has neither sovereignty nor independence and is incapable of surviving. This is the Bush plan.

Q: Will there be a third Intifada over this?

A: In order to be able to speak of a third Intifada, first the second has to end. But we don’t believe that it has finished yet. It might be weakened somewhat, but the conflict isn’t over. I would say instead that we have a new stage of the Intifada. As to how it should be fought, the democratic struggle of the masses can take the form of a popular struggle, or armed resistance. It depends on the context. We don’t believe in elevating any one form of resistance over another. We believe in all forms of the struggle. As long as Israeli occupation and colonisation continue, we have every reason to continue the Intifada. Every form of resistance is necessary and important. So the armed struggle is important too. There is no need to give it up.

Q: The PFLP mayor of Bethlehem was elected with the support of Hamas. Was this a tactical electoral pact, solely for Bethlehem, or could it foreshadow other tactical or strategic agreements wbetween the PFLP and Hamas?

A: We favour a common strategy of resistance against the Israeli occupation and building up the PLO, so we are not looking for an agreemtn with just Hamas but with all the political currents in the Palestinian population. In the case of the municipal elections in Bethlehem in particular, the balance of power there forced Hamas to support both the Fatah candidate, and the PFLP candidate. This is normal in the current political situation. If the Popular Front has the opportunity to take the lead in Bethlehem, with the support of Hamas or Islamic Jihad or some other political group, like Fatah, this isn’t a problem for us.

But in order to speak about a strategic alliance between the Popular Front and Hamas, there would have to be an agreement on a political programme. There are already some common points and a common vision on a political programme. There are certainly common points, like the same view on how to manage the struggle against the Zionist occupation. Elsewhere in the Arab world, there are Islamic political movements that struggle against imperialism, against the plan for the Greater Middle East, against globalization and its consequences for the Arab world, just as nationalist movements or movements of the left do. But on the strategic level, we want to create a pole of the democratic left [really leftist and really democratic, not like the “democratic left” in Italy]. There is an Islamic pole with its programme, and another pole of the bourgeoisie, namely the PA and Fatah. For our part, we are trying with all our strength the create a third pole, a pole of the democratic left.