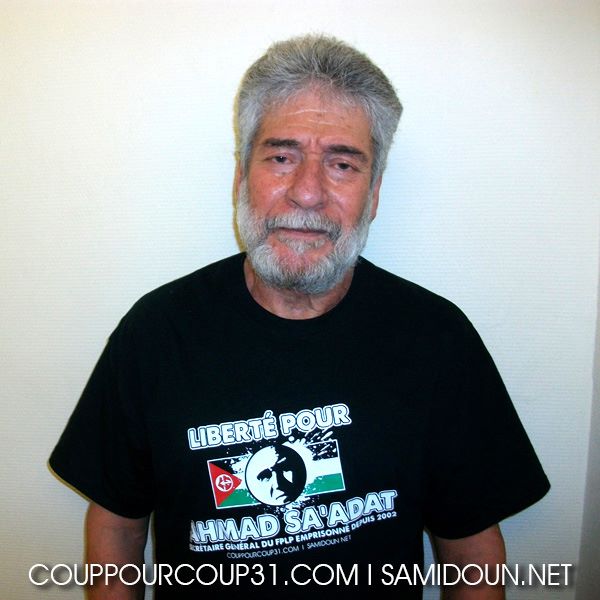 The letter comes shortly after a photo of Georges Abdallah in Lannemezan prison was released by Coup Pour Coup 31 and the campaign to free Georges Abdallah, wearing a T-shirt in solidarity with Sa’adat and demanding his freedom. It also comes as organizers are gearing up for the large national demonstration on 21 October outside the Lannemezan prison to demand Abdallah’s release.

The following video was released by the Campaign to Free Georges Abdallah to urge participation in the demonstration:

The text of Sa’adat’s letter follows:

I send my warm greetings to you, with the most beautiful words and sincere declarations of pride, respect and appreciation, in my name and in the name of my comrades in the Popular Front for the Liberation of Palestine prison organization. These sincere words reflect our unity of thought and common suffering in the face of the tools of oppression and our common struggle for a better world in which the people regain their stolen humanity.

I feel pain when you feel pain, and you are always a source of great pride and respect. From your principled steadfastness through decades in prison, we build our determination, our will and our intellectual conviction; from your head held high, always accelerating our steps to become nearer to the sun of truth and liberation, with you, by you, and with all of the forces of freedom in the world. Together, our strength is multiplied dozens of times, renewed in our hope and confidence in the inevitability of victory, the victory of daybreak over the night, the truth over lies and hypocrisy. You are a living witness to the falsity of the claims about the “free world,” “democracy,” “separation of powers” and “independence of the judiciary” of which the ruling class brags in media forums and lecture halls. We are chained by the common injustices manufactured in the United States of America, which are the same ones used in Palestine, and I do not doubt that there are many examples in all of the strongholds of imperialism.

You and those who unite with you in support and solidarity, the true comrades in France, Lebanon, Palestine and all over the world, are the natural extension of those who once carried hammers, stormed the Bastille and broke into the prison walls…the extension of those who turned the cells of the Zionist occupation into revolutionary schools from which successive generations learn the meaning of will, determination and commitment…the extension of all of the forces and movements for liberation in the world who resist for true democracy and a world free of exploitation, tyranny and subjugation, where the values of social justice, liberation and dignity prevail.

Until we meet one day in the world of freedom, you remain a symbol and a model for us to follow.