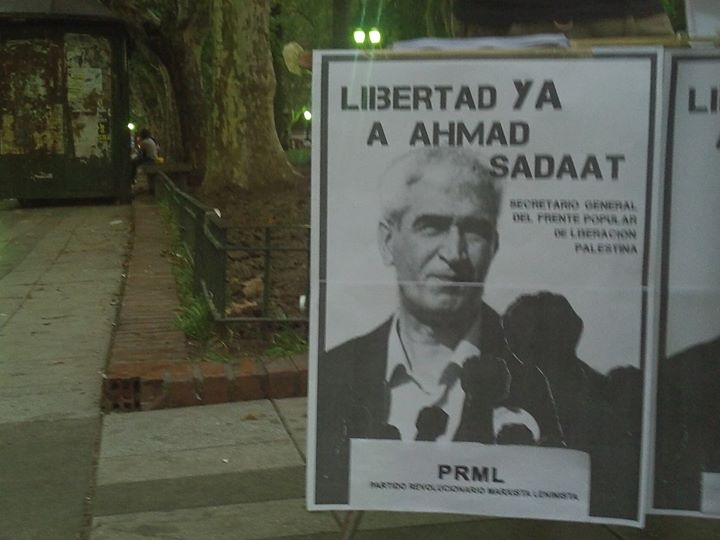 Ahmad Sa’adat, imprisoned Palestinian national leader and General Secretary of the Popular Front for the Liberation of Palestine, called on all national forces to make every effort to sustain and deepen the growing intifada and support its continuation in daily life, altering the nature of the relationship between the occupation and the Palestinian people.

In a letter from Nafha prison, Sa’adat urged the need for a unified national leadership to embrace and lead the popular intifada, including the establishment of committees in the regions and villages to lead popular organizing in all areas.

“This is a fateful moment for our people. The current conditions pose no choice for our people but the option of resistance, resistance to change the balance of power and the current situation…Here is the importance of systematizing the efforts of the uprising, defining its terms of reference and slogans,” said Sa’adat.

He urged a final end to the path of Oslo, including a full end of all relationships with the occupation, especially and urgently putting an end to security coordination and putting as the first task on the agenda of the national and Islamic forces the primary contradiction with the occupation.

Sa’adat emphasized that the unity that exists in the struggle must be established at a political level to rebuild the structures of national unity, particularly the rebuilding of the PLO and its institutions, which requires the convening of the leadership of the inclusive provisional framework of the PLO, including all forces and factions of the Palestinian movement, including Hamas and Islamic Jihad.

Sa’adat further urged response and rejection of all attempts to contain the intifada through international political projects. These include such projects as the “French initiative,” European Union or US attempts to bring us back to the framework of Oslo; the people are aware of the risks of these projects and reject them, and will close the doors before any such political project, said Sa’adat.