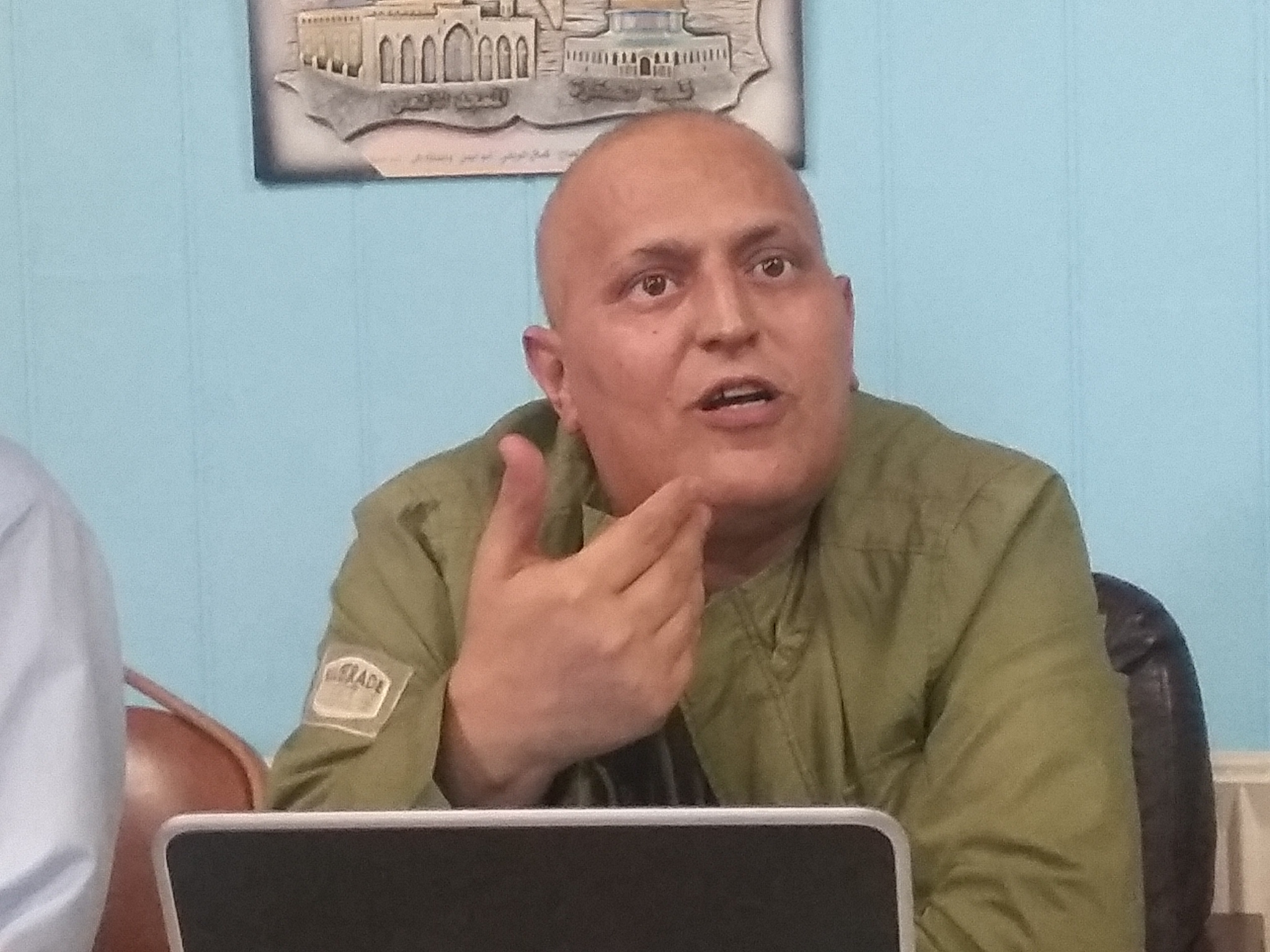 “Those who were involved in signing the Oslo agreement must apologize to the Palestinian people and submit themselves to appear before a Palestinian court under popular Palestinian control, after resigning from their positions in the Palestine Liberation Organization and official Palestinian institutions,” said Khaled Barakat, the coordinator of the Campign to Free Ahmad Sa’adat, in a videoconference with supporters of the Palestinian cause.

“However, they do not have the courage or the conscience – they will not apologize to the Palestinian people. Because they are the political representation of a class, not only one organization or individual,” said Barakat. “Oslo was a crime, a scandal and a disaster. What was signed at the White House 22 years ago as the ‘Declaration of Principles’ was, in essence, the declaration of the Palestinian bourgeoisie of their bankruptcy and failure in the leadership of the revolution of the Palestinian people for liberation, return, self-determination and victory.”

Barakat said, “This Palestinian class reached to this end itself before 1993. It was always looking to secure its interests and capital in the ‘national state’ and then in a ‘national authority on any freed inch’ and then accepted to be a junior partner and subsidiary in a triangle: Israel – Jordan – Palestinian Authority. This was before becoming fully in the pocket of the enemy and its economy. All of the economic agreements signed by the Palestinian Authority with the Zionist entity, with the European Union and the so-called ‘donor countries,’ and the acceptance of the terms of international financial institutions, such as the World Bank and the International Monetary Fund, as well as the Paris economic agreement, are all part and parcel of the political crimes committed against the people and the homeland.”

“The Palestinian right wing in the PLO and the PA express the interests of a parasitic bourgeois surrendered totally to the enemy, who have failed at all levels. They have failed to build national institutions or democracy, failed to achieve the so-called Palestinian state through negotiations, failed to establish a national resistant Palestinian economy, and failed to achieve a bare minimum of unity of the Palestinian people and their political forces inside and outside Palestine – alongside an unprecedented fiasco in the fields of culture and education. And above all of this, these forces have sabotaged real national and popular achievements, in particular destroying the achievements of the major popular uprising from 1987-1993,” said Barakat.

“In defense of their petty privileges, in the interests of the Zionist enemy and of United States imperialism, the Palestinian Authority has exercised the worst forms of repression and persecution against the vanguard of our people in the West Bank and Gaza, including complicity in assassinations, arresting and torturing them in prisons, security prosecutions, the confiscation of the livelihoods of thousands of workers, and conspiracy against the forces of the Palestinian resistance,” said Barakat. “These are all crimes – serious crimes, for which there is no statute of limitations. If there is any success that can be recorded for this corrupt approach, it is for the oppressor, in the accomplishment of all of the above. Oslo was a victory for the enemy, its most important and its greatest since 1948.”

In response to a question about the situation of the Palestinian Authority, Barakat said, “The enemies of the Palestinian people want them to have a corrupt leadership and a corrupt Authority, so that they can always be controlled and replaced as necessary, to ensure that they are more dependent, more reactionary and more willing to work in the service of the Zionist project. The occupation deals with the Palestinian security services in the occupied West Bank as if they are employees, especially after the ‘reformation’ of the security forces overseen by the occupying enemy and supervised by US General Keith Dayton personally. The role and methods of the security services have changed – and worsened – since 2005. All of this has taken place at the hands of Zionist general and under the direct control of the U.S. Central Intelligence Agency. This is known – our people know the truth,” Barakat said.

In response to a question on the role of the Popular Front for the Liberation of Palestine in the postponement of the Palestinian National Council meeting and the next steps, Barakat said that “the position of the Popular Front is expressed by the central leadership in the homeland and in the diaspora, as well as in the statement of the General Central Committee, which was issued in regard to the last announced session. The Front explained the reasons for its boycott o the meeting and indicated the dangers and risks that would arise from the continuation of the monopolistic PLO leadership on this exclusionary road. The Front says that the solution to the internal Palestinian crisis lies in the application of the Cairo agreement in 2005, not to reproduce the failed experiment itself under the name of ‘dialogue between Fateh and Hamas’ or ‘Palestinian reconciliation between Fateh and Hamas’! Why? Because this agreement came from a dialogue in which all national and Islamic forces participated and signed on in Egypt. This also emerged in a political initiative known as the Prisoners Document, which came from inside the prisons and was signed by all the forces, and blessed by the leaders of the prisoners’ movement. From here, the Front sees that this agreement is a fit beginning to restore national unity despite our reservations on some of its provisions. but in the end, the proof is in the implementation and not in anything else. The step of postponement was comfortable for all.”

In response to a question on Hamas’ position on participation in the PLO and asking why a new unified national front for the Palestinian resistance should not be organizaed as an alternative to the current PLO, Barakat said, “Before the announcement of the postponement of the PNC meeting, the Popular Front advised the leadership of the Hamas movement to not take any extreme political steps or negative actions that would not be beneficial at this stage. The main banner at the press conference held by the Front in Mar Elias refugee camp called for a unified Palestinian National Council, because the Front is aware of the importance of building a unified national front in the national democratic liberation stage of our struggle. This broad national front was embodied by the PLO for a long period of time, as the sole legitimate representative of the Palestinian people. But today there are major Palestinian forces that do not participate in it. And the PFLP is aware that in order to broadean and extend the state of open confrontation with the Zionist enemy on the one hand and meet the challenges that beset our region on the other hand, there must be a minimum Palestinian national consensus that is acceptable to our people, locked in a bitter, difficult struggle and confronting a strong Zionist and imperialist enemy. We must protect the internal front, to escape the era of siege and open new horizons for the national struggle for liberation. On this basis, the Popular Front has launched bilateral and collective dialogues with various forces according to this vision: national unity on the basis of comprehensive national rights and adherence to popular and armed resistance as an alternative to negotiations and settlement.”