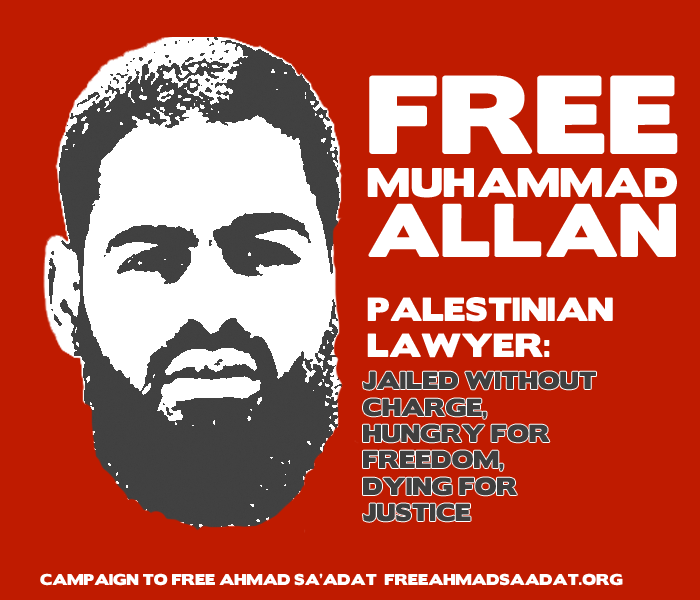 The Campaign to Free Ahmad Sa’adat urges all of its friends and supporters around the world, and all global movements for justice, freedom and liberation, to take action, protest and demand freedom for Muhammad Allan, Palestinian lawyer held in Israeli administrative detention without charge or trial, now in a coma and struggling for both his freedom and his life after 60 days of hunger strike. We urge all to take to the streets, to escalate the movement for the boycott and isolation of Israel, to defend the life of Allan and demand his freedom – and that of his fellow nearly 6,000 Palestinian political prisoners.

“We hold Israel fully accountable for the life of Muhammad Allan, the heroic imprisoned Palestinian struggler,” said Khaled Barakat, coordinator of the international Campaign to Free Ahmad Sa’adat. “Israel is responsible for his life and must bear the consequences if he dies.”

“Muhammad Allan, if he dies, will not be the first Palestinian executed by Israel within its dungeons, through torture, denial of medical care or forced feeding. Four Palestinian prisoners – Abdul Qader Abul Fahem, Ali al-Jaabari, Rasim Halawa, and Ishaq Maragha – were killed by force-feeding – with which Allan is threatened today, even as he lies in a coma,” Barakat said.

“Hundreds of Palestinians have been killed and had their lives taken inside Israeli prisons over decades of occupation, but he would be the first Palestinian prisoner to die on hunger strike. The liberation martyrs whose lives have ben taken by colonizers as they hunger strike for justice and freedom – like Bobby Sands and his 9 Irish comrades in British prison – are immortal symbols of struggle that belong to global movements for justice and liberation,” said Barakat.

“The case of Muhammad Allan illustrates that Palestinians will continue to struggle by all means until they defeat administrative detention. We know that this is a long and brutal battle, as it is a system that serves the interests of the occupation and that they are not willing to relinquish. It is a system that was inherited from the era of British colonialism in Palestine, which means that we hold Britain responsible for Muhammad Allan and for every Palestinian who is and has been held in administrative detention,” Barakat said.

“Brother Muhammad Allan demonstrates true Palestinian heroism and courage,” Barakat said. “He follows in the steps of many other Palestinian prisoners, using his last resource to confront the occupation, even through hunger. We are witnessing the birth of new young Palestinian leaders in the arena of confrontation with the occupation: Lina Khattab, Khader Adnan, Muhammad Allan. This is the case and experience of every colonized and oppressed people who rise up for their liberation.”

“Finally, Israel must bear the consequences and pay for its crimes. Israel has enjoyed global impunity thanks to the support of the United States and fellow imperial powers. This must come to an end through the efforts of Palestinian resistance and revolution, supported by the people of the world,” Barakat said. “Otherwise, the occupation,killing and torture will continue as business as usual.”

“There is a need to build the international campaign against administrative detention. This should be a priority and part of the efforts of the international movement to boycott Israel, as the prisoners emphasized in their latest statement,” Barakat said. “We need to hear the voices of the world demanding freedom for Muhammad Allan, demanding freedom for our imprisoned leaders.”