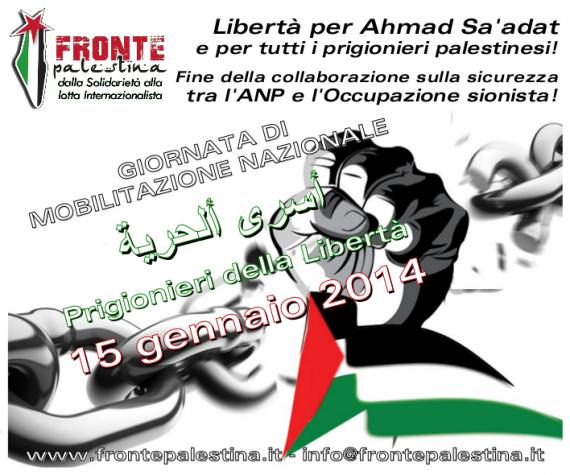 Fronte Palestina is organizing events throughout Italy demanding freedom for Ahmad Sa’adat and all Palestinian prisoners, as well as an end to Palestinian Authority security cooperation with Israel, on 15 January.

15 January 2015 marks the 13th anniversary of the arrest of Sa’adat, general secretary of the Popular Front for the Liberation of Palestine and Palestinian national leader, by Palestinian Authority security forces. He was held for over four years in a Palestinian Authority prison under US and British guard before the prison was attacked by Israeli occupation forces; Sa’adat today is imprisoned for a thirty-year sentence in an Israeli prison.

Events are being organized in cities throughout Italy to mark the anniversary, as follows:

Milan:
Thursday, 15 January
5:30 PM
Via Dante/Largo Cairoli
Demonstration against the mass imprisonment of Palestinians and the silence of the world

Florence:
Thursday, 15 January
7:00 PM
Via Villemagna 27/a
Presentation on campaign for Palestinian political prisoners and screening of “Women in Struggle”